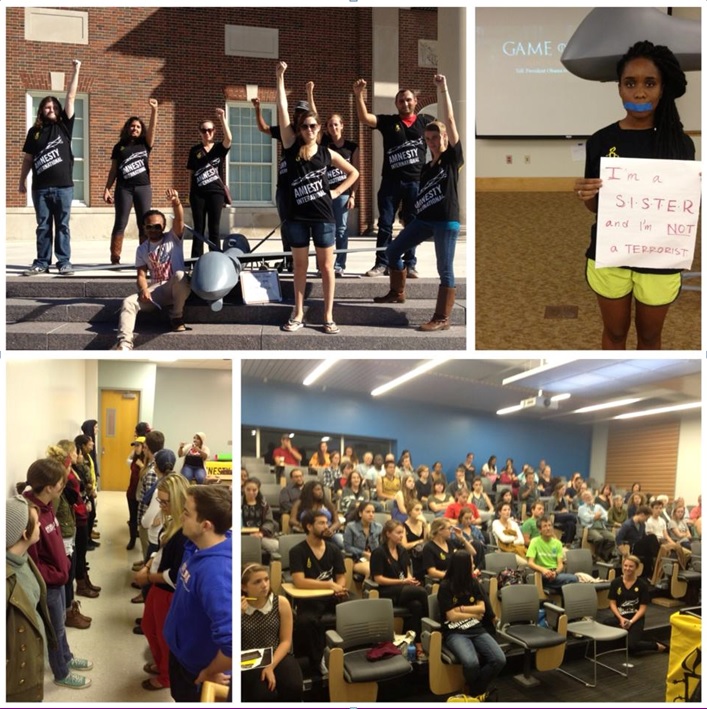 As I write this, Amnesty International activists across the U.S. are preparing to come together for Regional Conferences. They are crafting booths for Ideas Fairs, writing curricula for workshops on effective advocacy, researching complex human rights issues around the globe. They are organizing their communities to come together and build a movement.

At Amnesty, I am continually struck by the Power of Us – the theme of this year’s Regional Conferences. Everywhere I look, Amnesty activists are building a larger and stronger “us” with even more grassroots power.

Right now, a team of Amnesty activists and organizers is touring the country on the #GameOfDrones Tour, educating communities and campuses about the human costs of the Obama Administration’s use of drones around the world. At each stop of the tour, organizers recruit and train new activists to continue the movement and build an ever-growing “us” working together for justice and human rights.

The #GameOfDrones Tour continues to crisscross the country and will stop in Los Angeles during the Western Regional Conference. Starting with a screening of the powerful and award-winning documentary Dirty Wars on Friday, Nov. 1, the tour stop continues the following day with the organizing, planning, and execution of a direct action to demand the U.S. government come clean about the drone program and stop unlawful drone strikes.

From recruitment to education to planning to action, each #GameOfDrones tour stop represents a microcosm of the immense Power of Us when community members come together, empower one another, and make their voices heard.

Activists in Los Angeles will continue to grow and exercise that power over the course of the weekend, and I invite you to join us: November 1-3 at the Four Points Sheraton Hotel at LAX. Register online here.

Joining the movement of local passionate activists and organizers will be a lineup of truly incredible speakers and presenters. I will be there, of course, to share my story and what I’ve learned along my journey as an advocate for human rights, and here are just a few of the amazing individuals I’ll be honored to share the stage with:

These men and women have spent decades building the Power of Us into a force to be reckoned with – a force capable of changing the world.

And that audacious proposal – to literally change the world – is exactly why we at Amnesty come together to build an “us” in the first place. It’s why we hold conferences, why we have panels and workshops, why we tour the country educating and organizing.

And it works. In fact, when it comes to changing the world, the Power of Us is the only thing that ever does.