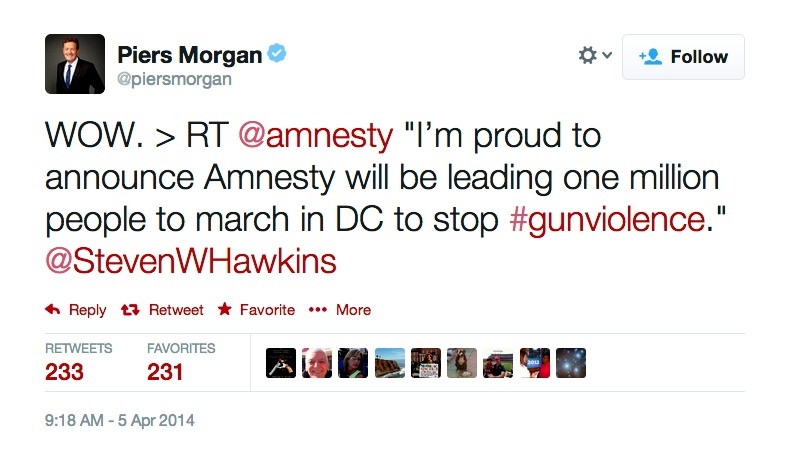 @Amnesty is now 1 million followers strong. Together we’ve changed lives and freed prisoners. As with the Amnesty movement of the past 50 years, we’ve gotten here by individual after individual standing up and shining a light, inspiring others to stand with them. Shine on!

#5: Our first tweet has a special place in our hearts

It seems like just yesterday, but in fact, it’s been nearly 6 years since @Amnesty first tweeted for justice. What was that first post? A simple message of support for Troy Davis, then on death row in Georgia.

He even promoted engaging with the human rights experience of the concert through our #AmnestyConcert hashtag. Thanks Stephen!

#3: The internet retweets for justice

Just last month, @Amnesty reached a milestone when our tweet about the disturbing reality of the death penalty in 2013 was retweeted over 2,200 times – making it our most retweeted post ever. 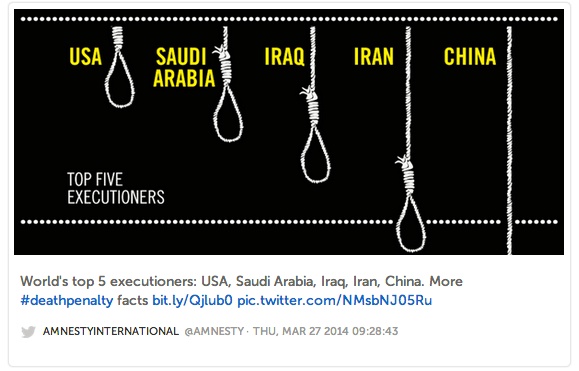 Previously, the record for “most retweeted @amnesty tweet” was held by this subversive post, published in conjunction with a worldwide campaign targeting internet censorship in Egypt.

#1: A Palestinian prisoner walked free from an Israeli prison after a global Twitter campaign by Amnesty International. 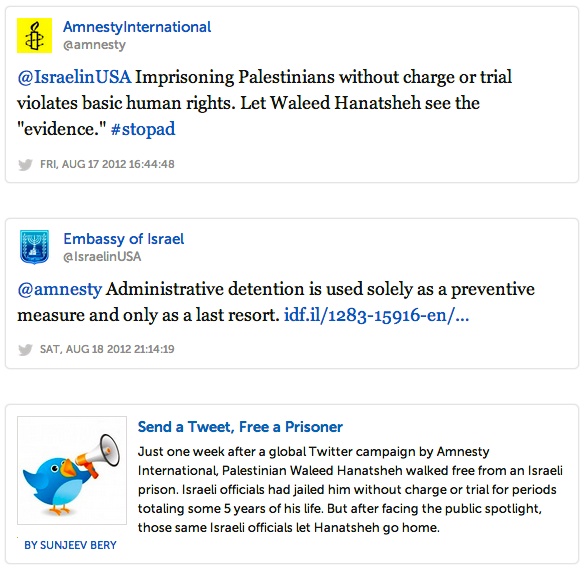 May 2011: “Activists tweeted directly to the Jammu and Kashmir Chief Minister Omar Abdullah @abdullah_omar, asking him to “free Faizan.” He replied to the tweets, saying “We are looking at his case sympathetically & will decide in the next couple of days” and eventually reconsidered the case.

A few days later, after this barrage of tweets coupled with on-the-ground campaigning, on April 5 Faizan was free.

Thanks to social media, the world we live in is getting smaller and smaller – and the more interconnected we are, the harder it will be for human rights violations to go unnoticed.

Faizan’s story is proof that enough voices speaking up about injustice are too loud to be ignored, especially on a public medium such as Twitter, where both action and inaction by those responsible can easily fall under scrutiny.”

As Sunjeev Bery writes in his blog post chronicling the Twitter campaign and subsequent release of the Palestinian prisoner, Waleed Hanatsheh:

“The Internet has become more important to our advocacy in recent years, but does it actually work? Can electronic messages impact governmental policies or help free prisoners in far flung countries?

The answer we’ve found is yes – when you have the right target, the right campaign, and the right online channel. In this case:  Twitter. …The decision makers responsible for [these prisoners’] plight are paying close attention.  They are intently studying what you and I will do next.“

One thought on “The Path to @Amnesty 1 Million”