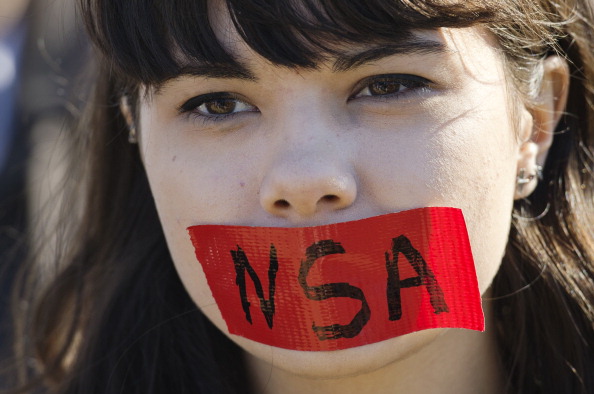 A demonstrator wearing tape over her mouth takes part in a protest against government in Washington, D.C. (Photo Credit: Mandel Ngan/AFP/Getty Images).

The ‘Big Brother Problem’ has helped to kick off this year’s discussions of the most pressing problems facing the world today as the World Economic Forum meeting gets under way in Davos, Switzerland.

This is an important recognition of the urgency of the issue. It is one that affects every single one of us and is an area of law that needs to be resolved.

Some of the most memorable headlines of 2013 involved personal privacy, data security and intelligence gathering issues from all corners of the globe – from the U.S. to Brazil, from Australia to India.

But what has bothered me about the conversation to date is the way it has been framed by some defenders of mass surveillance programs. We must choose, they say, between security or privacy, protection or liberties.

This is a simplistic way of looking at the issues and it has damaged our ability to identify sound public policies that strike a sensible balance between these concerns.

The question that should be asked is: is it right for the state to store, and share, information about our personal phone calls, emails and social media interactions… potentially indefinitely?

The answer, I hope, is one that no one can dispute. People have a right to privacy; governments should only be looking at our information if, and only if, they have probable cause to suspect wrongdoing.

Of course, law enforcement agencies have an obligation to investigate potential crimes. But that duty is not a license to conduct a fishing expedition. Law enforcement agencies should not let their investigations become the electronic equivalent of a trawling net that indiscriminately scoops up everything that passes, with the catch put on ice indefinitely.

The surveillance of metadata tracks every instance in which we email, speak to, or communicate with someone online. It is no different than having someone spying on your house and monitoring who comes in and who leaves, at all times of the day.

A woman listens to speakers during the Stop Watching Us Rally protesting surveillance by the U.S. National Security Agency in front of the U.S. Capitol building in Washington, D.C. (Photo Credit: Allison Shelley/Getty Images).

This is an unacceptable breach of privacy that cannot continue. We must find a way to square the privacy vs. security argument in a more practical way for the future.

A starting point would be significantly greater openness about the scope of what is being monitored and why. We cannot effectively assess the extent of the threat to our privacy and determine what additional safeguards are needed unless we know what governments are collecting and what uses they make of that information.

This need for additional safeguards is clearly demonstrated by the way GCHQ, the U.K.’s surveillance headquarters, is operating. GCHQ evades legal scrutiny by outsourcing its surveillance operations to the USA, asking the National Security Agency (NSA) to do what it itself would never be able to do.

The NSA, in turn, has grown into one of the most terrifyingly powerful government bodies in the world. Since 9/11, it has essentially been given a blank check to expand its sphere of influence exponentially, without any fear of oversight or transparency.

It was welcome news on Friday to hear President Obama affirming the need to safeguard the privacy of people, both in the U.S. and around the world. The President’s acknowledgements are certainly a step in the right direction, after such a disappointing year of revelations about the extent of the US’s intelligence gathering.

However, the truth of the matter is, the substance of the President’s most recent proposals hardly revolutionizes the issues.

The President will still retain the power to authorize surveillance activities without having to answer to judicial review and the future of the country’s bulk collection of metadata remains unclear.

Furthermore, despite the President’s signal that he is prepared to recognize the privacy rights of those of us who live outside the USA, his policy falls short on specifics.

Most of the President’s proposals will now need to be voted on by Congress before they can take effect. Even before the President spoke, bills had been proposed by Senators Baldwin and Leahy. But these legislative fixes themselves were limited in scope as they did not apply to people living outside of the country.

There is no doubt that striking the right balance between privacy and security requires careful, thoughtful analysis. Policy makers need to take a long, hard look at the choices they’ve made over the years that have created a world of Big Brother states.

Looking to the future, my hope is that our governments will not use rhetoric about security as any further justification for sacrificing a fundamental human right: the right to privacy.

Salil Shetty is Secretary General of Amnesty International. He is a panelist on ‘The Big Brother Problem’ at the 2014 World Economic Forum Annual Meeting in Davos.

One thought on “Solving the ‘Big Brother Problem’ of Mass Surveillance”