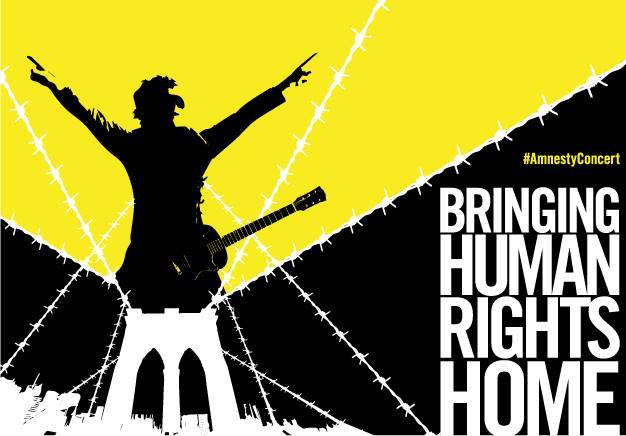 The Flaming Lips, Imagine Dragons, Ms. Lauryn Hill, Tegan and Sara, The Fray, Cold War Kids, Colbie Caillat, Cake and more will be there with us, showing a new generation of activists how to stand up for justice at home and abroad.

The “Human Rights Concerts” were a series of concerts Amnesty presented between 1986-1998. The most high-profile of these was the “Human Rights Now!” world tour. Over a million people attended the six-week, five-continent, fifteen-nation, twenty-concert tour featuring Bruce Springsteen, Sting, Peter Gabriel, Tracy Chapman and Youssou N’Dour. Other musicians, such as Bono, Joan Baez and k.d. lang joined at various parts of the tour as special guests.

Dan Reynolds, lead singer of the Grammy-nominated rock band Imagine Dragons, spoke about the power and legacy of those concerts:

“Amnesty’s past concerts have featured some of the greatest artists of our generation and have been catalysts for real, measurable change. It’s an honor to perform as part of this event and continue the cause of championing human rights around the world.”

To this day, we are grateful and inspired by the support we’ve received from some of the music industry’s biggest names. We’re eager to carry on this tradition of historic concerts to continue raising awareness about human rights around the world. It’s time to pass that torch to the next generation of musicians – and the next generation of activists.

Because it’s about more than just an amazing legacy. The rights to which every person is entitled are still at risk every day in every country around the world. Now more than ever, prisoners of conscience, human rights defenders and communities at risk need us to stand up with them to hold human rights abusers accountable and demand justice.

Join us on February 5 at Amnesty’s newest Human Rights Concert. Tickets go on sale January 11. Sign up here for exclusive access and join the conversation on Twitter at #AmnestyConcert.