The situation at Guantanamo is coming to a head.

Desperate for justice, after over a decade of indefinite detention, at least 100 detainees have gone on a massive hunger strike in protest. According to media reports, 21 of these detainees are being shackled and force-fed through tubes to keep them alive, against their wishes.

Pressure to close the prison is at an all-time high. Responding to the strike, President Obama reiterated his vow to shutter the facility:

“I don’t want these individuals to die… Guantanamo is not necessary to keep America safe. [It] is contrary to who we are… and it needs to stop.” – President Obama, April 30, 2013

Tell Obama and Congress that you support closing Guantanamo now. 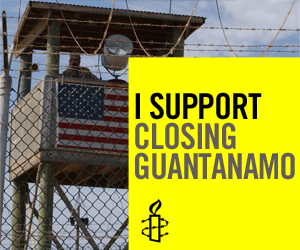 Death should not be the only way out of Guantanamo.

Imprisoned in Guantanamo in 2002, Adnan Latif was never charged with a crime, denied the right to make his case in a fair trial, put in solitary confinement and tortured. A judge ordered his release in 2012. He died at Guantanamo on Sept. 8, 2012.

Nine prisoners have died waiting for justice in Guantanamo.

Obama blames an uncooperative Congress for frustrating his effort to close Guantanamo, but he is not without options for doing the right thing, right now. For example, dozens of detainees have been cleared to leave and can be transferred under current US law. People like Shaker Aamer, who the UK government says should be free with his family in London. Resolving such cases can happen now and would be a positive step.

For the remaining prisoners, charge and fairly try them in federal court, or release them.

President Obama must take action now and Congress must support, not hinder, the effort. Join us and send your message today – President Obama, make good on your promise to close Guantanamo.

Let’s end this shame. With your help, we can do it.

3 thoughts on “Guantanamo: Is Death The Only Way Out?”