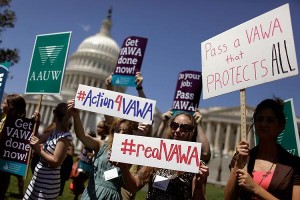 As a law professor who has spent countless hours working on violence against Indigenous women in the United States, I believe that it is critically important that Congress continue the good work started with the Tribal Law and Order Act passed in 2010. I know too many Native women who have been victimized with no justice.

The epidemic of violence against Native women is alarming. At least one in three Native women will be raped in their lifetime, a statistic that is much higher than the national average. Native women need our support: an inclusive VAWA is one critical step towards reducing the devastating rates of violence that occurs against women on tribal lands.
The Senate version of VAWA would begin to diminish these appalling statistics by restoring tribal court jurisdiction in cases of domestic violence committed by non-Native men on tribal land. As it currently stands, federal or state prosecutors have exclusive responsibility for responding to violence and abuse committed on tribal lands by non-Natives, but they fail to prioritize such cases.

This means that far too often Native women never receive the justice or redress that they deserve. Some studies indicate that the majority of perpetrators of sexual violence against Native women and girls are non-Native men; therefore allowing tribal courts jurisdiction in these cases would have huge implications for ending crimes with impunity against an at-risk community.

Last week, Congressman Darrell Issa (R-CA) and Tom Cole (R-OK), a member of the Chicasaw Nation, introduced H.R. 6625, known as the Violence Against Indian Women Act. This bill addresses some of the concerns raised by those who oppose the inclusive VAWA, while still ensuring that Native American women receive protection. The Violence Against Indian Women Act will help move VAWA forward and defend the rights of Native American and Alaska Native women.

We cannot allow this injustice against Native women to continue. Allies in the human rights movement can play a significant role in supporting Native women at this critical time.
Help us spread awareness and gain support by tweeting the following:

@EricCantor Pls accept Issa’s HR 6625 compromise on tribal jurisdiction as a path forward to get #VAWA done for all women! #PassVAWA2012

@SpeakerBoehner Accept Issa’s HR 6625 compromise on tribal jurisdiction. A path forward to get #VAWA done for all survivors! #PassVAWA2012

4 thoughts on “Native Women’s Rights Are in Danger: Tell Congress to Pass a Tribal-Inclusive VAWA that Provides Justice for All Women!”