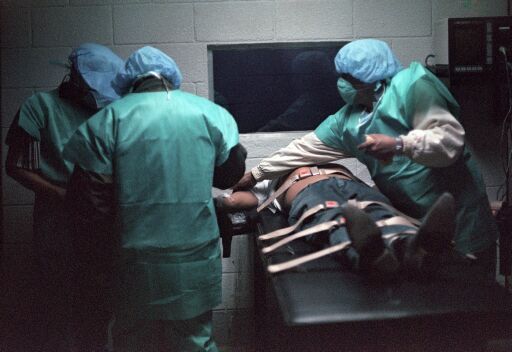 TEXAS CODE OF CRIMINAL PROCEDURE, Art. 43.24. TREATMENT OF CONDEMNED.  No torture, or ill treatment, or unnecessary pain, shall be inflicted upon a prisoner to be executed under the sentence of the law.

Hypocrisy: a feigning to be what one is not or to believe what one does not; especially: the false assumption of an appearance of virtue.

30 years ago, just after midnight, Dec. 7, 1982, Texas executed Charlie Brooks with a lethal cocktail of three drugs.  Texas had been execution-free for 18 years, since 1964. The first African American executed in the U.S. since reinstatement of the death penalty in 1976, Brooks’ final words were an Islamic prayer (“There is no God but Allah. Verily do we belong and verily unto Him do we return.”) followed by a “stay strong” to his girlfriend.

He had been sentenced to death for murdering an auto mechanic named David Gregory, but it was unclear if he or his accomplice had pulled the trigger, and the prosecutor had tried to stop the execution.  The courts and the Governor had declined to intervene.  A needle had already been inserted into Brooks’ arm when an unseen prison employee behind a curtain started the flow of lethal drugs.  In seven minutes, after a period of gasping and wheezing, two doctors examined him and Dr. Ralph Gray pronounced him dead.

Designed to make executions look humane (like pet euthanasia), and to make witnesses to the killings more comfortable, lethal injection has nevertheless run into problems.

The result of 30 years of lethal injection has been the perpetuation of a massive hypocrisy. We are killing with drugs and medical professionals who are supposed to heal, while pretending that this deliberate act of violence is peaceful. Politicians spout “tough on crime” rhetoric while someone else carries out the “tough” punishment behind walls and shields of anonymity. We pretend that these staged killings are for victims’ families while ignoring families that don’t want it, and ignoring the fact that the condemned has a family too. Take your pick; the hypocrisy is widespread. And all this is just a subset of the death penalty’s grand hypocrisy: calling for death in order to show our reverence for life.

Lethal injection is also set up to enable evasion of responsibility. Doctors don’t actually kill the prisoner (they just pronounce death or administer anesthesia), drug companies don’t supply the drugs directly (they are acquired through third parties), judges and juries don’t take part in the killings (they just issue the sentences).  Prison guards, chaplains and wardens don’t kill prisoners either; they merely restrain and/or comfort them. Someone inserts the needles, but someone else (or, at one point in some states, a machine designed by Holocaust denier Fred Leucther) may inject the poison.

The reason states go to such lengths to make it look like no one is getting blood on their hands (literally and figuratively) is because most of us believe, to put it simply, that killing is wrong.  And no amount of anesthesia or secrecy legislation can cover up that basic fact.

So, ultimately it’s all untenable. A public that believes in basic human rights won’t stand forever for state killing, no matter how sanitized or hidden from view or distant from their personal involvement. Those closest to executions (wardens, medical professionals, drug companies) are objecting.  Juries are declining to issue death sentences.  And public opinion at large is dropping.

People are waking up.  And as the illusion of lethal injection is exposed and the repugnance of executions revealed, the public is realizing there is simply no humane way to kill.