Amnesty has serious concerns about the fairness of Leonard Peltier’s (above) trial (Photo Credit: Taro Yamasaki).

February 6th marked the 38th anniversary of the arrest of Anishinabe-Lokota Native American, Leonard Peltier. Amnesty International marked this date, as did many others in the U.S. and around the world.

Leonard Peltier was arrested 38 years ago in connection with the murders of two FBI agents, Jack Coler and Ronald Williams, during a confrontation involving American Indian Movement (AIM) members on the Pine Ridge Indian Reservation in South Dakota in June 1975. While he admits to having been present during the incident, Leonard Peltier, who in 1977 was sentenced to two consecutive life sentences for the murders, has always denied killing the agents as alleged by the prosecution at his trial.

All legal appeals against Leonard Peltier’s conviction have been exhausted; his most recent petition for release on parole was denied by the pardon board in 2009, and he will not be eligible for parole again until 2024, when he will be 79. His scheduled release date is not until 2040, when he will be over 96 years of age…if his declining health allows. 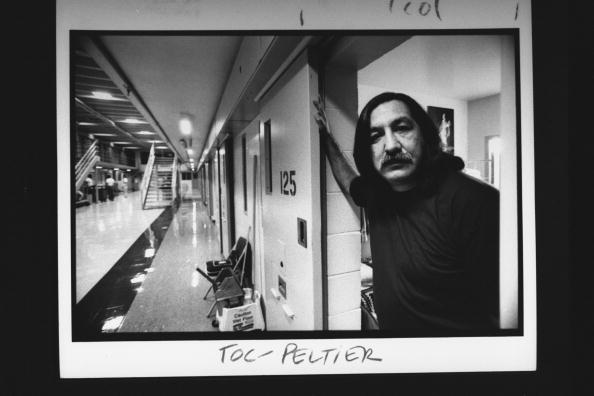 Leonard Peltier, a Chippewa-Lakota Indian serving a life sentence for the murder of 2 FBI agents, posing in the open doorway of his cell (Photo Credit: Taro Yamasaki//Time Life Pictures/Getty Images).

He is currently held at the Coleman Federal Correctional Complex in Florida, far from his family, spiritual advisers and friends in North Dakota. Due to the nearly 2000 mile distance, he rarely receives any visitors.

Recently, the U.N. Special Rapporteur on the Rights of Indigenous Peoples, James Anaya, traveled to Coleman Penitentiary with Peltier’s spiritual adviser, Len Foster, to meet and speak with Leonard in prison. SR Anaya met with Leonard for four hours to discuss his case and touch upon topics of Peltier’s interest such as the state of the world’s indigenous population.

Anaya has previously stated, “…new or renewed consideration should be given to clemency for Leonard Peltier” in order to achieve a meaningful reconciliation with the indigenous peoples of the United States.

Amnesty International recognizes the seriousness of the crime for which Leonard Peltier was convicted and has the deepest sympathy for the relatives of Jack Coler and Ronald Williams. However, after studying the proceedings and the information which has been released since his conviction, Amnesty has serious concerns about the fairness of his trial.

Amnesty International continues pushing for Leonard Peltier’s release based on the interests of justice and upon humanitarian grounds due to his declining health. Please take part in any solidarity events in your local area and take action on Leonard’s behalf.

10 thoughts on “Leonard Peltier, 38 Years A Detainee: How Did We Get Here?”