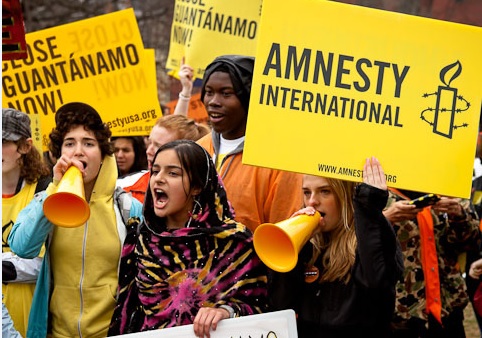 The Urgent Action Network continues to be one of the most powerful tools student activists have (Photo Credit: Amnesty International).

This post is the third in a three-part blog series commemorating the launch of Amnesty USA’s redesigned Urgent Action Network. Read on for how this updated tool will help activists make a stronger impact.

In the never ending stream of pamphlets, tri-fold boards, and issues on college campuses, students are often left wondering what impact their voice actually makes. As an Amnesty International student leader at Virginia Commonwealth University, I was able to show students that their voice had the power to impact the lives of people at risk of human rights violations around the world. I used the tools provided by Amnesty International’s Urgent Action Network to engage students and send their voices to the chambers of a legislature, into the ears of oppressors and through the bars of a jail cell.

My call to action as a student activist was through an Urgent Action that alerted me to the arrest of Jenni Williams and Magodonga Mahlangu, two leaders of the social justice movement Women and Men of Zimbabwe Arise (WOZA). WOZA, a movement that promotes civil and human rights for all Zimbabweans through strictly peaceful, non-violent mobilization efforts has been the target of police brutality for years. In response to their peaceful activism riot police often beat and arrest members merely for expressing their constitutional and international rights.

After being alerted of their situation, I knew I could not be silent. The next day, I went to the center of campus with a stack of blank papers, envelopes and pens. I stood silently at first, deciding how to engage my fellow students and fearing that no one would be compelled to stand up for human rights defenders in Zimbabwe. I did not know what to expect from my peers, but hundreds came out and took action while hurrying to class, biking home, or on their way to meet friends. They affirmed my passion for human rights and made me incredibly optimistic about the power and desire students have to create impact by making their voices heard.

At the time, it felt like such a small thing to do for individuals in so grave a situation. What difference, I wondered, could the voices of students in the United States possibly have in the life of a human rights defender like Jenni Williams? I wondered what support our voices provided Jenni in her fight for human rights.

It wasn’t until later when I heard Jenni’s words that I realized what an impact my letter and the letters of students at VCU had:

“I’ve been arrested over 33 times. Every time, I sit in a prison cell and I expect at any moment to be tortured, raped, or to disappear as I’ve disappeared for days on end without anybody knowing where I am. I know that I have a big sister out there and that big sister is you little sister in the school and the big sister is also you Amnesty International, because you look after me. You are my guardian angel…

And that is an incredible thing for me. You, little sister, and you big sister Amnesty International, are the ones who keep my heart beating and make me feel less stressed, less worried when I’m sitting in there doing my national duty in jail. I know that you’re watching over me and I think that is just the most incredible partnership. And without that, I don’t know where we would be today.”

These words and the words of thousands of individuals around the world provide the strongest call to action for students. Seeing your impact illustrates the power Amnesty has always had in connecting individuals around the world. Each Urgent Action connects activists not to a case, but to an individual story. That connection is where we make our greatest impact, because when we come together for human rights change, we cannot be ignored. One of our greatest tools in creating action and organizing rapid response continues to be the way hundreds of students at VCU took action to help Jenni: the Urgent Action Network.

Today, I continue my fight for human rights as the manager of the Urgent Action Network at Amnesty International USA, my first job after college. The opportunity to be part of this historic network constantly renews my strength to stand up for human rights.

When I look back to my first call to action on behalf of WOZA, I am able to see the power of the Urgent Action Network and its ability to connect individuals to each other. This connection provides me with a constant reminder to act with urgency and speak out when the rights of an individual are being violated.

Our messages break through prison walls and political barriers into the hands of human rights defenders, activists and individuals and communities at risk around the world. The impact of our collective voice reaches thousands of people every day. This impact, however, can be even greater.

This week, Amnesty USA launched an updated version of the Urgent Action Network (UAN). Our rapid response email alert system allows activists to stay updated on human rights abuses around the world. The new UAN sign-up form allows people to choose which UAs they want to receive by theme, region and frequency. It is also now mobile-enabled, so you can sign up more members on the go. More activists taking action at the same time will maximize our impact and help drive the needle towards human rights change – and we need your help to spread the word and recruit more members.

5 thoughts on ““I Knew I Could Not Be Silent”: How This Student Helped Free An Imprisoned Activist”