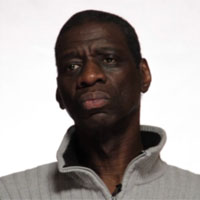 My name is Darrell Cannon. I’m here to share the story of more than 100 people who were tortured by Chicago police under the command of former Chicago Police Commander Jon Burge.

I am a survivor. And I need your help.

On Nov. 2, 1983, a contingent of police officers burst into my family’s apartment and arrested me for murder.

On the way to Chicago’s Area 2 headquarters, they warned me that they had “a scientific way of interrogating n******.”

They later drove me to a secluded location, where they forced a shotgun in my mouth and pulled the trigger over and over again, making me believe it was loaded each time. They pulled my pants down and shocked me with a cattle prod on my genitals.

Not one officer has been convicted for their crimes of torture.

”
I spent 24 years in prison, including nine years in a super-max prison, for a murder I did not commit. The coerced confession was the crucial piece of evidence used to convict me.

Police detectives under the direction of former Commander Jon Burge tortured over 100 men and women like this from 1972-1991. Sixteen survivors have been exonerated. Approximately nineteen still remain incarcerated. Demand justice for Chicago police torture survivors like me.

Not one officer has been convicted for their crimes of torture.

I fear justice will not come for me or the other survivors without intense national pressure on the Chicago City Council, which is considering an ordinance right now to establish reparations for victims of torture under Burge’s command.

Don’t let those who tortured me get away with it. Please join Amnesty in fighting for justice for torture survivors in Chicago.

Thank you for joining the fight to #StopTorture.

5 thoughts on “I Am Proof: Torture Exists in the United States”