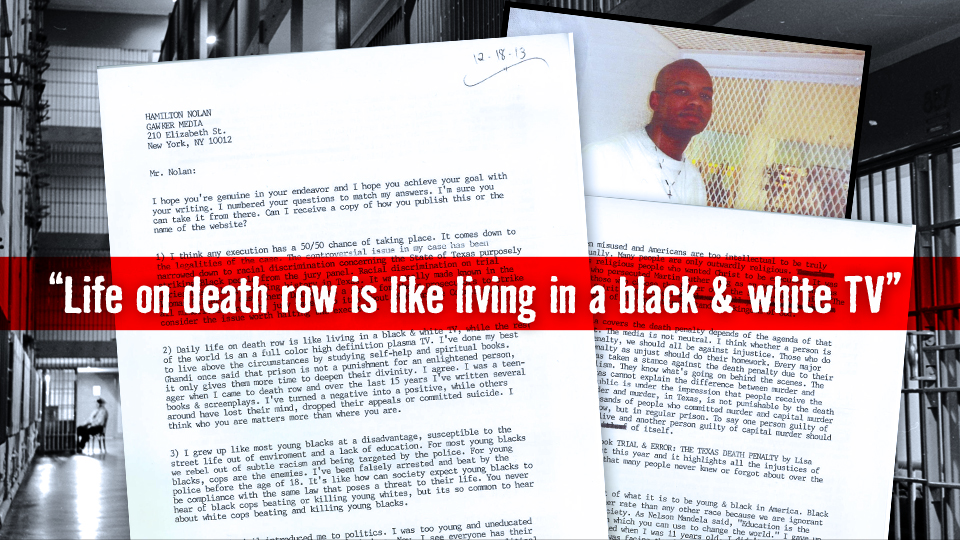 You said that my perspective is different and therefore my words have a sort of value. Yet, you're talking to a young man that's been judged unworthy.

”
I learned that some of the responses on your website were positive and some negative. I can only appreciate the conversation. Osho once said that one person considered him like an angel and another person considered him like a devil, he didn’t attempt to refute neither perspective because he said that man does not judge based on the truth of who you are, but on the truth of who they are.

Your words struck a chord with me. You said that my perspective is different and therefore my words have a sort of value. Yet, you’re talking to a young man that’s been judged unworthy to breathe the same air you breathe. That’s like a hobo on the street walking up to you and you ask him for spare change.

Without any questions, you’ve given me a blank canvas. I’ll only address what’s on my heart. Next month, the State of Texas has resolved to kill me like some kind of rabid dog, so indirectly, I guess my intention is to use this as some type of platform because this could be my final statement on earth.

I think ’empathy’ is one of the most powerful words in this world that is expressed in all cultures. This is my underlining theme. I do not own a dictionary, so I can’t give you the Oxford or Webster definition of the word, but in my own words, empathy means ‘putting the shoe on the other foot.’

Empathy. A rich man would look at a poor man, not with sympathy, feeling sorrow for the unfortunate poverty, but also not with contempt, feeling disdain for the man’s poverish state, but with empathy, which means the rich man would put himself in the poor man’s shoes, feel what the poor man is feeling, and understand what it is to be the poor man.

Empathy breeds proper judgement. Sympathy breeds sorrow. Contempt breeds arrogance. Neither are proper judgements because they’re based on emotions. That’s why two people can look at the same situation and have totally different views. We all feel differently about a lot of things. Empathy gives you an inside view. It doesn’t say ‘If that was me…’, empathy says, ‘That is me.’

What that does is it takes the emotions out of situations and forces us to be honest with ourselves. Honesty has no hidden agenda. Thoreau proposed that ‘one honest man’ could morally regenerate an entire society.

For the complete text of Ray’s letter, please visit Gawker and take action to tell the state of Texas not to execute Ray Jasper.

13 thoughts on “Have You Seen This Powerful Statement From a Death Row Inmate?”