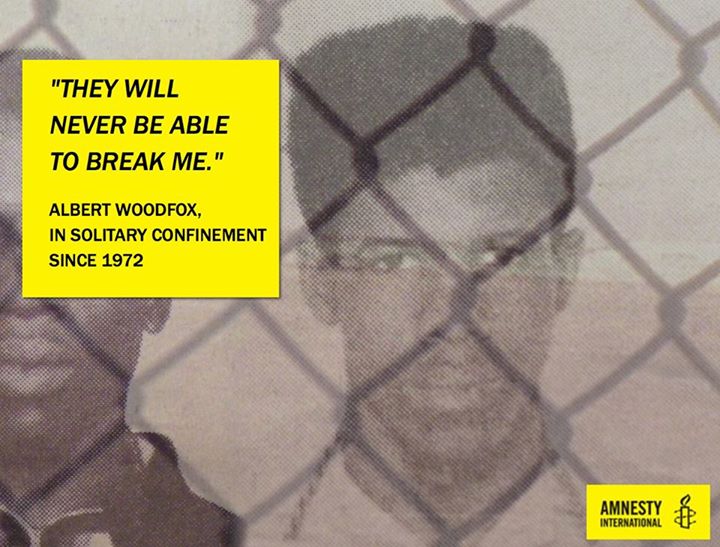 By Jasmine Heiss, Campaigner at Amnesty International USA. Originally appeared in the Times-Picayune.

Albert Woodfox takes the stand at a courthouse in Baton Rouge this morning. His testimony will cover the most recent chapter in what has become four decades of a nightmare behind bars. Mr. Woodfox, 66, has spent 23 hours a day in a 6- by 9-foot cell for more than 40 years.

These are conditions of prolonged solitary confinement, years in a cage with little meaningful human contact and no access to rehabilitation programs. This treatment is cruel, inhumane and degrading. Since March, the Louisiana corrections department has compounded this nightmare by subjecting Mr. Woodfox to invasive strip and cavity searches every time he leaves his cell – when he goes to see the doctor, gets a haircut or uses the phone to call his lawyers.

These searches are not only degrading, they’re illegal – and in a strange twist of irony, it was Mr. Woodfox’s previous lawsuit against the state that set this precedent.

The court’s order clearly delineated the nuances of the ruling: Searches may be required before an inmate enters a segregation area or following unescorted contact with general population inmates, but those searches must cease if a segregated inmate is moved within the segregation area or while in the prison and under escort or observation.

That precedent, which lasted more than 30 years, came to an abrupt end when Judge LeBlanc died in March, and the strip and cavity searches quickly resumed both for Mr. Woodfox and others housed on his tier at David Wade Correctional Center. Mr. Woodfox endures strip searches as often as six times a day. He and his attorneys tried to resolve this without litigation for months to no avail. Now they have turned to the court to step in. 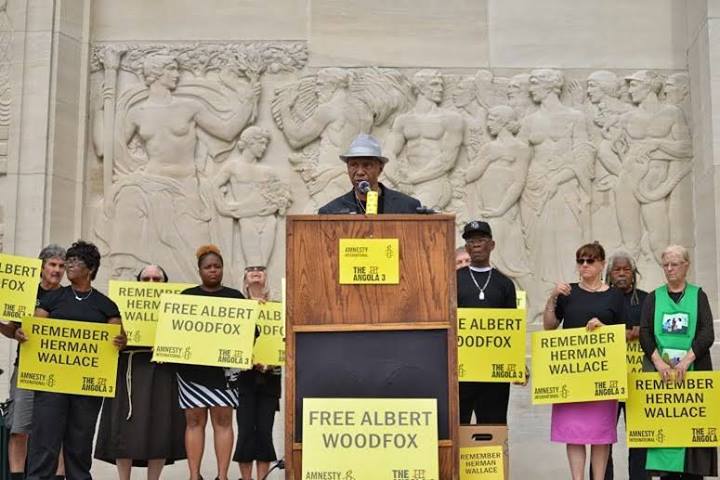 In most states, the law lives longer than the judge, but in this case, his lawyers are requesting a restraining order against the Louisiana Department of Public Safety and Corrections.

Every day, corrections officers strip and search Mr. Woodfox and the other prisoners held in solitary confinement. He is searched despite the fact that he is shackled in wrist, ankle and waist chains when outside of his cell, is under constant observation or escort and typically has no contact with individuals other than correctional personnel.

Even when he is left to exercise alone in a fenced-in yard – essentially a closed cage – Mr. Woodfox is invasively searched before returning to his cell. The prison continues this practice despite knowing these strip searches are unlawful. Unable to explain the safety or security threats they are addressing when they search Mr. Woodfox, they arbitrarily force him to strip until he is naked, bend at the waist, lift his genitals and spread his buttocks so that officers may inspect him.

To say that such practices are an affront to one’s dignity seems almost too mild.

As the state corrections department recklessly pursues vengeance for a murder there is little evidence Albert Woodfox committed, they do so with indifference to his dignity and with little regard for human rights or state laws.

”
When I called for Mr. Woodfox’s release on the Capitol steps in Baton Rouge three weeks ago, I did so knowing more than 50,000 people had signed a petition also calling on the state of Louisiana to pursue justice.

Albert Woodfox was convicted of the murder of a prison guard at Louisiana State Penitentiary, despite the fact that no physical evidence tied him to the crime and the key eyewitness was bribed by the state. After a legal process that has spanned four decades, the serious flaws in Mr. Woodfox’s case stand without remedy. In December, Amnesty International will feature Mr. Woodfox’s case in the Write For Rights Campaign – the world’s largest letter-writing event. Tens of thousands of activists will write letters to Gov. Bobby Jindal and Attorney General James “Buddy” Caldwell, calling on the authorities to see that Mr. Woodfox is immediately released.

When Mr. Woodfox takes the stand today, his testimony will prove that you can strip a human being of his clothes, but that discarding a man’s dignity is a much heavier burden. As the state corrections department recklessly pursues vengeance for a murder there is little evidence Albert Woodfox committed, they do so with indifference to his dignity and with little regard for human rights or state laws.

However, the world continues to watch Louisiana and affirm Albert Woodfox’s basic rights and dignity. Justice may be delayed, but it will never be silenced.

One thought on “HAPPENING NOW: Albert Woodfox Takes the Stand at a Baton Rouge Courthouse”