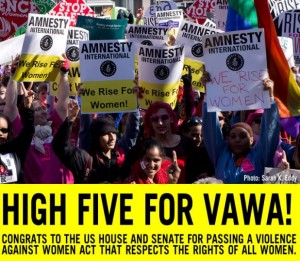 This is an amazing victory that will help end violence against women in the United States – ALL women, not just some.

Here are the five reasons that I’m excited about this victory and that you should be too:

1. New provisions that will help Native American and Alaska Native women access justice. Native American and Alaska Native women face complex jurisdictional issues that make protection, reporting, and prosecution of domestic violence nearly impossible. Imagine telling the police that you have been assaulted and having them tell you, too bad, we can’t help. VAWA helps change this by ensuring that Tribal courts can issue and enforce protective orders to help stop domestic violence against Indigenous women.

2. New provisions to help Immigrant women in the U.S. who often face higher rates of sexual harassment and of battering than other women, yet are less able to report these crimes due to their legal status, isolation and other factors.

4. Inclusion of the Trafficking Victims and Protection Act (TVPA). The Violence Against Women Act also includes a reauthorization of the TVPA, legislation that gives crucial tools to law enforcement to end human trafficking and provides critical services to trafficking survivors. Amnesty International identified the TVPA as a key tool in ensuring the rights of trafficking survivors and called for its reauthorization in our report on human rights abuses in the U.S. Southwest; In Hostile Terrain.

5. And finally, Reauthorization of VAWA which will ensure that millions of survivors will be able to continue to access critical programs and justice mechanisms to help end violence against women. VAWA, originally passed in 1994, is a groundbreaking law that extends protection to millions of women from sexual and domestic violence, and dating violence.