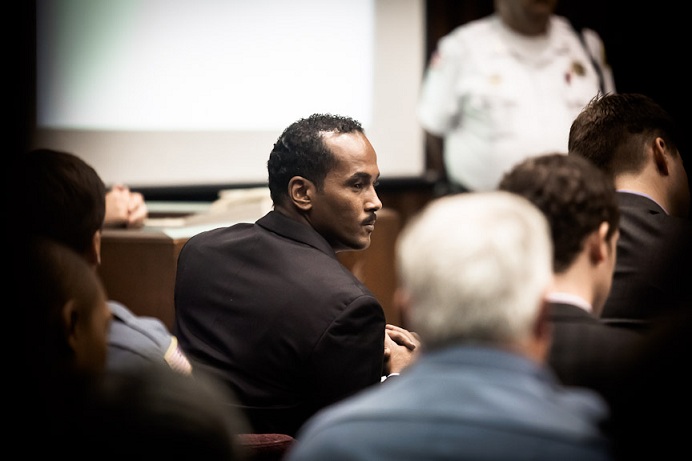 Reggie Clemons at day one of the trial that will determine if he lives or dies. © Scott Langley

Day one of the Reggie Clemons hearing concluded in St Louis, Missouri yesterday.  I left with its intensity lingering in my bones.  Directly in front of me was the man himself, Reggie Clemons, sitting quietly in a suit provided to him less than an hour before the hearing was to begin.  His alert eyes followed the proceedings that will have a bearing on whether he will live or die.  To my right was Rev. Thomas, his father.  In front of him was the victims’ mother, Mrs. Kerry.  Both sat silently.  I guessed that they had a mixture of numbness and pain in the face of a 21-year legal process set in motion by the terrible events of a dark night in 1991.

Behind me was an audibly frustrated woman, who I learned was the grandmother of one of the other two African American men who, with Reggie, was sent to death row.  (His sentence has since been changed to life).  Filling in the remaining stretches of pew space in the small courthouse were mostly Reggie supporters and some journalists.

The hearing got off to a smooth start with little emotion, despite the intense feelings running through the many individuals in the room who had a connection to the human beings involved in the case.  Reggie’s lawyers presented their theory of what actually happened in the case and why he deserved to have his death sentence removed and a new trial granted.  The state described the case from a very different point of view and argued that Reggie’s case should stand as it is because there was no new evidence, except for some new DNA testing, which they will describe in more detail as the hearing proceeds this week. 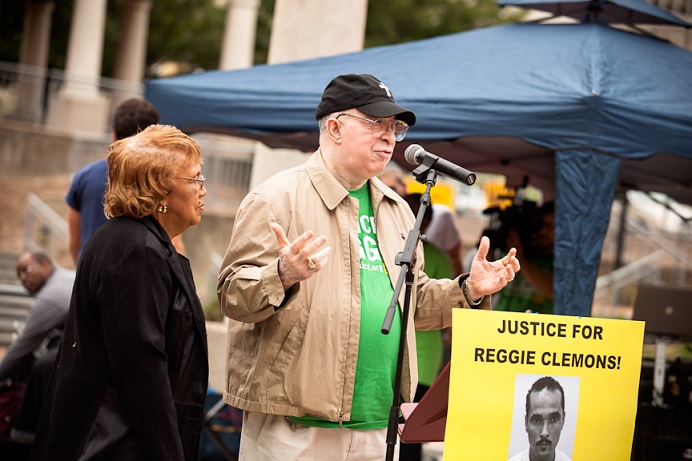 Reggie’s father, Rev. Reynolds Thomas speaks out in support of his son at a rally in St. Louis on September 15. © Scott Langley

Reggie’s lawyers called two witnesses to the stand and played a video of a third witness who they had previously deposed.  Their focus for most of the day was to prove that the prosecutor (who was cross-examined) acted inappropriately by editing a police report that was key to the case.  The video-recorded police detective said, “I don’t think a prosecutor has ever made changes to a draft report.”  He agreed that many of the lines struck from the original report were inappropriately removed in the final report.  The draft of the report showed the DA’s handwritten notes marking which lines to omit from the final version.  This included the coast guard’s assessment of the river and how unlikely the star witness’ story was that he jumped into the river and could survive.  It also changed the sense that the star witness offered testimony on his own, in one version of the story, rather than as a result of police suggestion.

The state pushed back that the defense had ample opportunity to challenge this at trial and other stages in the legal process.  And if they were right to a certain extent, what does it mean when you have an incompetent lawyer who fails to mount a vigorous defense?  Are you simply out of luck, especially if you face a prosecutor whose behavior was essentially the opposite – aggressive to the point of being found in contempt of court, ordered to pay a fine?  After all, the law requires that you get to go through the process, but does not require that the defense and prosecution are equally matched.

And what does it mean for the families to go through numerous proceedings, trying to address these issues that get calcified in a legal system that doesn’t like to alter the course set at the trial?

This process is an important opening.  The Missouri Supreme Court’s willingness to assign a special master to Reggie’s case was an unusual and significant move.  I hope that more truth will come to light so that the human rights of all involved are ultimately respected and these families can start to heal.  The truth that is shining brightly for me is how dangerous and damaging it is to allow fallible institutions made up of fallible human beings to wield such awful and uncorrectable power.

Take action to stop the execution of Reggie Clemons

7 thoughts on “Determining Life or Death: Day One of the Reggie Clemons Hearing”