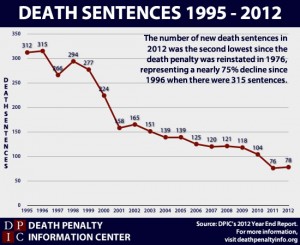 Many states, even if not fully abolishing the death penalty, seem to be gradually opting out. Here are seven significant signs that American capital punishment continued its slow, but by no means uniform, decline in 2012.

It is clear that in 2012 the United States of America continued to be extremely conflicted about the death penalty. Its use and its support are diminishing, in some places more than others. And as we wrestle with the bigger question of our culture of violence, it is likely that we will see more state repeals, more clemencies, and in general more evidence that the death penalty’s time is coming to an end.