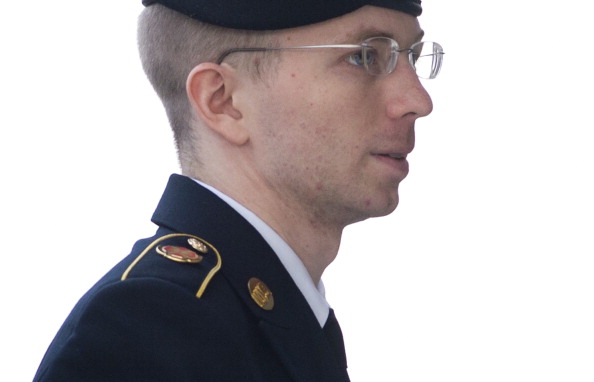 UPDATE: It was reported on August 22 that Pfc. Manning is now publicly identifying as Chelsea Manning and requests that she be identified as such from now on. Amnesty International will now refer to her as Chelsea Manning out of respect for her wishes.

It has been 1,182 days since Pfc. Bradley Manning was arrested at Forward Operating Base Hammer, Iraq for releasing classified information to Wikileaks. This morning, he was sentenced to 35 years in prison, as well as received a reduction in rank to private, forfeiture of his military pay, and dishonorable discharge.

He has already served more than three years in pre-trial detention, including 11 months in conditions described by the U.N. Special Rapporteur on Torture as cruel and inhumane.

He will get credit for those more than 3 years of pre-trial confinement, including 112 days for being unlawfully punished by harsh conditions at the Quantico, Va., Marine Corps brig – a literal drop in the bucket compared to the enormous sentence he is facing.

Manning acted at least in part on the belief that he could spark a meaningful public debate on the costs of war, and specifically on the conduct of the U.S. military in Iraq and Afghanistan, which he reasonably believed amounted to human rights violations.

His revelations included reports on battlefield detentions and previously unseen footage of journalists and other civilians being killed in a U.S. helicopter attack, information which should always have been subject to public scrutiny.

Despite the fact that he faced the possibility of a life in prison – either through conviction on the aiding the enemy charge or the maximum sentence for all of the other charges of which he was convicted – he was never able to raise a public interest defense during trial, to explain his motives, or to provide context for why he believed his actions would remove the fog of war for the world.

Sitting in court for much of the trial, it was hard to watch this young man sit there, stone faced, staring headlong at the possibility of a lifetime in prison.

”
The prosecution appealed to the Judge to sentence Manning to 60 years, not only to punish him for violating his military oath, but also to send a message to any potential future leaker. International human rights law frowns on retributory sentencing, and excessive punishment may constitute arbitrary deprivation of liberty as well as cruel, inhuman, or degrading punishment.

Sitting in court for much of the trial, it was hard to watch this young man sit there, stone faced, staring headlong at the possibility of a lifetime in prison. All the while knowing that numerous high-level officials have never been held accountable for the grave human rights violations committed during the U.S. government’s so-called “War on Terror.”

For example, high-ranking officials avoided investigation for the abuse of detainees at Abu Ghraib prison and elsewhere in Iraq in 2003-2004. While 11 low-ranking soldiers were sentenced to prison terms after being convicted in courts martial, they have all since been released. The Brigadier General in charge of the detention facility was reprimanded for dereliction of duty and demoted to Colonel. No criminal charges have ever been made in relation to the U.S. secret detention program where enforced disappearance and torture were authorized at the highest level of government. Details of the program remain classified.

For all of the reasons above, Amnesty International is joining the Bradley Manning Support Network to petition President Barack Obama to grant Manning a commutation to time served.