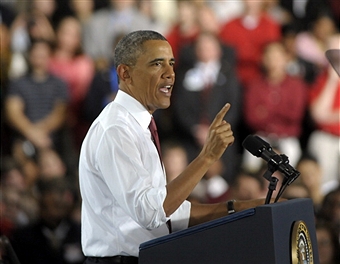 On Friday, January 17, President Obama will announce the results of his review of National Security Agency surveillance programs. Will he renounce mass surveillance and put human rights at the heart of reform? Or will he perpetuate a global spying program that puts free speech and privacy rights of people around the world at risk?

It’s tough to sort rhetoric from reality on an issue as complicated and contested as surveillance, so we’ve put together a cheat sheet to evaluate the President’s speech:

1) He pays lip service to the 95%, but doesn’t scrap global warrantless surveillance.

Ninety-five percent of the world’s people live outside the U.S. and are not U.S. citizens or lawful permanent residents. But under U.S. law they count as “non-U.S. persons” – who get few protections under the Foreign Intelligence Surveillance Act. Under section 702 of that law, the government claims authority to surveill countless people outside the U.S. – including the content of their emails – without notice, independent judicial review of individual cases, a warrant, probable cause or access to a remedy for privacy violations.

President Obama may well reference the 95%’s rights in his speech, and the need to restore the trust of the international community. But the Review Group on Intelligence and Communications Technologies’ recommendation, which President Obama may follow, would leave the fundamental authority for worldwide spying mostly intact. Without a repeal of section 702, mass collection of the world’s emails and other communications will unfortunately remain a cornerstone of abusive US counterterrorism practices.

2) He appoints a “privacy advocate” to the surveillance court and shifts the government’s bulk storage of data to the private sector, but leaves the framework for mass surveillance intact.

The President needs to reboot the surveillance program. Instead of keeping a spying architecture that has permitted mass surveillance on people around the world, the President should mandate baseline requirements to ensure that U.S. surveillance of anyone, anywhere, meets human rights standards. Rebooting the program to comply with human rights principles would mean:

Having a “privacy advocate” in the Foreign Intelligence Surveillance Court could add an independent voice to these secretive court proceedings, and help shape the court’s opinions. But the fact remains: the surveillance court has too often condoned the government’s claims of extremely expansive surveillance authority under current law. A privacy advocate would not be a sufficient check on abuse, without a fundamental reboot of the legal framework.

And ending the government’s storage of people’s data while requiring private companies to store it instead is a false fix. The President needs to reject mass collection of everyone’s data, period.

3) He talks about transparency, but doesn’t disclose key information.

Despite Edward Snowden’s revelations about the government’s extremely expansive claims of surveillance authority, there is still so much we do not know: just how many surveillance programs are there? What kind of information is the government collecting? And how many people have been surveilled?

The President needs to come clean and disclose the full catalogue of surveillance programs. The two known programs that the President is likely to discuss – the collection of phone records in the United States under section 215 of the USA PATRIOT ACT and the collection of the internet data of “non-U.S. persons” under section 702 of the Foreign Intelligence Surveillance Act – are perhaps only the tip of the iceberg.

That’s because the NSA also claims authority for overseas spying under Executive Order 12333. This executive branch authority could be the basis for undisclosed U.S. surveillance worldwide – and such spying would be subject to far less oversight by Congress and the surveillance court. The NSA’s collection of millions of email contacts and online address books of people worldwide, and U.S. citizen, which was reported earlier this year, is an example of the kind of secret spying program that may be authorized under this Executive Order.

4) He mentions human rights, but doesn’t create rules to protect them.

Lost in the surveillance debate’s shuffle of technical terms and national security rhetoric is that we all have the right to privacy: we have the right to be left alone as we go about our lives. If the government has probable cause to believe a crime has been committed, it can intrude on our private lives to the extent necessary. But in the absence of that or similar grounds, our lives are our own.

And our political opinions and religious beliefs aren’t a valid ground for government spying. The Review Group on Intelligence and Communications Technologies has recommended that the U.S. government not target people based “solely” on their political views or religious convictions. The President should follow that recommendation, but it is not enough. As long as U.S. law permits extensive surveillance based on vague “foreign intelligence information” or “national security” standards that can be distorted and abused, it will put human rights activists, political dissenters and minorities at risk of government spying. Not only does mass spying leave their privacy rights diminished, it can create a climate where people fear expressing themselves openly and worry that their beliefs and activities will leave them vulnerable to abuse by the U.S. government or other governments.