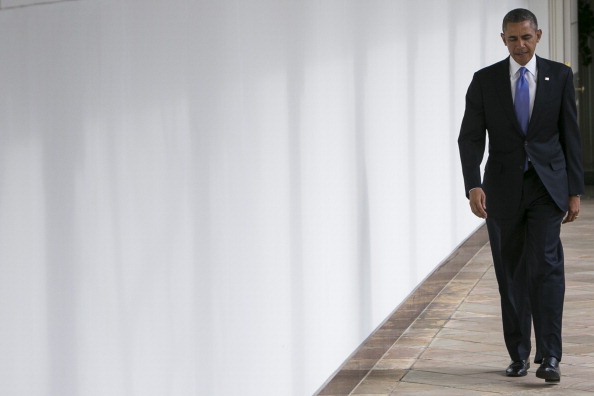 U.S. President Barack Obama walks along the colonnade of the White House from the residence to the Oval Office before the State Of The Union speech (Photo Credit: Kristoffer Tripplaar-Pool/Getty Images).

When President Obama addresses Congress tonight, he must give more than just lip service to human rights. We’ll be watching the State of the Union and listening to what he will propose on these four issues:

President Obama’s administration is now closing in on its 2 millionth deportation, while hundreds of thousands of families have been separated during the past five years.

It is imperative that the President and Congress work together to pass legislation that is based on human rights principles in order for the US to meet its obligations under international law and create an immigration system that respects the human rights of immigrants.

We urge him to use the State of the Union to strongly condemn LGBT persecution abroad and to recognize the need to advance LGBT rights here in the United States. President Obama must use the full power of the Presidency to ensure that all LGBT people, no matter where they live, can exercise the full range of their human rights, without discrimination or fear.

President Obama should revisit the issue of mass surveillance and announce further reforms with human rights at the center. The President’s recent recognition of the need to restrain surveillance of people around the world, while welcome, falls short of what’s needed to protect the right to privacy.

President Obama should announce an end to the bulk collection of information and any other U.S. mass surveillance programs here at home or around the world.

Regardless of citizenship or location, all people have the right to privacy under international law. Government surveillance must comport with human rights safeguards, which allow for lawful, effective surveillance while protecting against unchecked executive power.

One thing Obama’s unlikely to discuss at this year’s state of the union – but he really should – is the issue of criminal and racial justice.

An average of 5 million people are under state or federal supervision in the form of probation or parole. Juveniles continue to be tried and sentenced as adults in both federal and state courts. Tens of thousands of prisoners are held in isolation facilities across the U.S. The United States along with China, Iran, Iraq and Saudi Arabia accounted for most of the world’s judicial executions in 2012.

Lastly, communities throughout the country continue to be plagued by excessive use of force by law enforcement and profiling on the basis of race, ethnicity, national origin, immigration status, sexual orientation as well as gender identity or expression.

President Obama and Congress must work together to pass legislation such as the National Criminal Justice Commission Act 2013, which would implement reforms to address mass incarceration, the death penalty and discriminatory profiling, among other issues.

President Obama must also press Congress to pass and the End Racial Profiling Act of 2013, which would prohibit the use of and institute reforms to combat racial profiling..

President Obama must lead efforts to address a destructive system of criminal penalties that violates the rights of individuals and has imprisoned a generation.

Join us in calling on President Obama to address and remedy these human rights crises, both here in the U.S. and around the world.