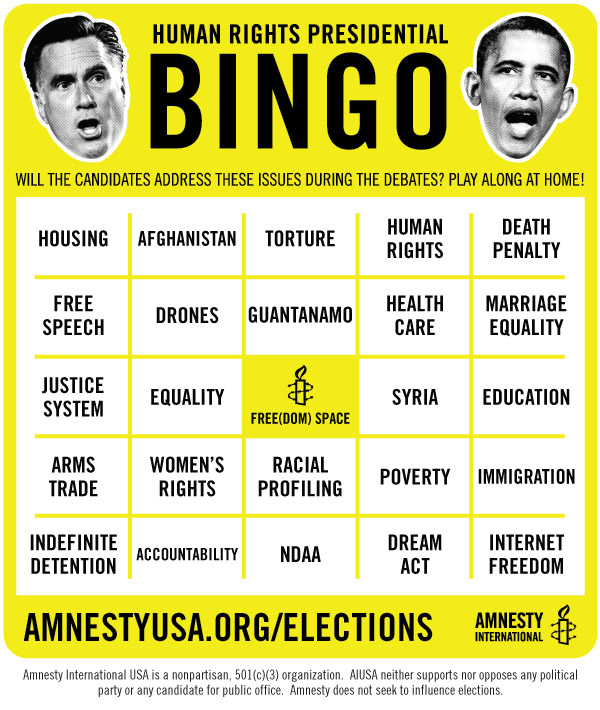 Click image to download a set of 4 Bingo cards you and your friends can play at home!

There is the ongoing crisis in Syria, where tens of thousands of civilians have been killed in the brutal crackdown by the government following protests for political reform.

There is the deteriorating situation in Afghanistan and the implications for women’s rights even as the U.S. and its allies negotiate their withdrawal.

There is the 10th anniversary in January of the arrival of the first war on terror detainees at the Guantanamo detention facility, which passed with little discussion or debate, followed last month by the death of Adnan Farhan Latif, who had been held there for over a decade, without ever being charged or brought to trial.

Amnesty International USA has published 12 for 2012, twelve questions that focus on the missing human rights agenda in the 2012 elections. The questions are aimed at encouraging the current political debates to ask the candidates whether they will commit to ensure that the Unites States will be a champion for human rights and include questions on closing Guantanamo, ending unlawful killing with drones, adopting a global Arms Trade Treaty, supporting the International Criminal Court, pursuing human rights-based immigration reform, signing an Executive Order on human rights, and several others.

What you can do

The first presidential debate will take place on Wednesday, October 3 at 9PM EST and will be moderated by Jim Lehrer of the PBS NewsHour.  Help us put human rights in to the 2012 election. Tell Mr. Lehrer ([email protected] or tweet @newsHour) to ask the candidates one of these 12 important questions.  For example you could tweet:

2 thoughts on “2012 Elections: Will The Candidates Bother To Address Human Rights?”