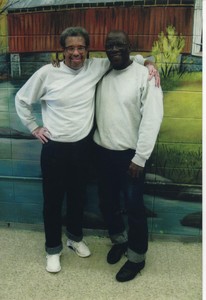 Woodfox and Wallace may be in isolation, but they are not forgotten. Our calls for justice will ring loud — on April 17 we’ll make sure Louisiana Governor Bobby Jindal hears us when we arrive at his Baton Rouge doorstep with tens of thousands of petition signatures from people in 125 countries in hand.

We can’t let more days pass without justice. Herman Wallace is now 70 years old, Albert Woodfox is in his mid-60s, and both men are suffering from serious health problems — made worse by the appalling deprivation in which they live.

Ill, advancing in age, with clean disciplinary records for the last 20 years — what is so dangerous about these men that could possibly warrant this inhumane treatment, for so long?

Because the prison authorities see them as a threat. The “Angola 3” organized their fellow prisoners against inhumane treatment and racial segregation in the early 1970s. Angola Prison’s warden, Burl Cain, has suggested that Woodfox and Wallace’s continued isolation is based on their political activism — particularly their association with the Black Panthers.

The “Angola 3” case highlights the failings of a Louisiana justice system that is undermined by discrimination. No physical evidence links Woodfox and Wallace to the 1972 murder of a prison guard. Inmate testimony is questionable. And judges who twice overturned Woodfox’s conviction for the murder cited racial discrimination, prosecutorial misconduct, and more.

14,600 days in solitary is far too many. But today, we can do something about it — demand justice for the remaining “Angola 3”.

And on April 17, we won’t take no for an answer in Baton Rouge!