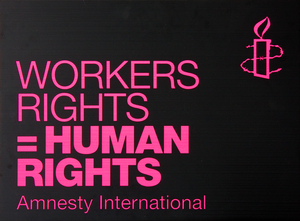 On March 8, two men on motorcycles cut off Carlos Hernández’s pickup truck fired eight 9mm bullets at him, killing him. Hernández was a member of several community organizations and labor groups, including:

You may recall the SNTSG from a blog I wrote in December, about four Central American cases in Amnesty’s Transforming Pain into Hope report about Human Rights Defenders in the Americas. One of the cases featured in that report was that of Luis Ovidio Ortíz Cajas, the Public Relations Secretary of the Executive Committee of the SNTSG. An unknown assailant killed Ortíz Cajas and three other men on March 24, 2012—a little less than one year before this latest killing.

END_OF_DOCUMENT_TOKEN_TO_BE_REPLACED

Just within the relatively small region of Central America, the report highlights four important cases of attacks on freedom of expression that seek to cover up other human rights abuses: END_OF_DOCUMENT_TOKEN_TO_BE_REPLACED

On Thursday June 2, Mansour Ossanlu’s wife stated that he had been granted a four-day medical leave for medical treatment. Amnesty International is unaware of the exact conditions of his release, but some reports suggest that he has been released on bail.

Mansour Ossanlu’s release is only temporary and while it’s welcome that the Iranian authorities have finally recognized his urgent need for rest and medical treatment – itself largely due to the appalling prison conditions in which he has been held – the basic injustice of his detention remains.

Mansour is the leader of the Union of Workers of the Tehran and Suburbs Bus Company. He is currently serving a five-year prison sentence for “acts against national security”. The charges stem from his peaceful work to obtain better conditions for workers in Iran and to end discriminatory laws and practices that curtail workers’ rights.

Mansour Ossanlu – and all others still held in Iran for their peaceful trade union activities – should be released permanently and unconditionally.

On April 4, 1968, shortly before his assassination, Dr. Martin Luther King Jr. stood with sanitation workers in Memphis to demand human rights, basic respect and collective bargaining to gain a better life. Today, hundreds of thousands of people are taking the same stand—together.

On April 4th people across the country will come together in support of worker’s rights and against the current assault on worker’s rights playing out in various US states.

All workers have a right to organize and to bargain collectively. Amnesty International stands in solidarity with all those seeking to defend collective bargaining rights anywhere these rights are threatened, and on April 4 we urge governors and legislators to protect workers’ rights by rejecting any attempt to limit collective bargaining.

We encourage Amnesty members to join the April 4th events and honor Dr. King’s vision for human rights. To find an event in your area and for more information visit the  We Are One website.  RSVP on Facebook here.

“The US has an obligation to uphold the rights of American workers – including the specific right to organize and bargain collectively.”

Wisconsin governor Scott Walker signed a bill on Friday that undermines the ability of unions in the public sector to protect workers. The legislation also takes away nearly all collective bargaining rights for most public employees, limiting their negotiation rights only to wages.