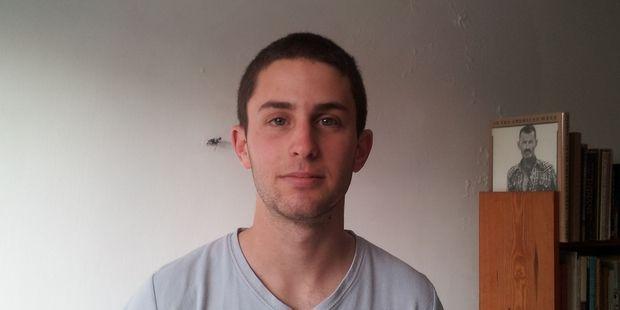 Each year, a handful of courageous Israeli teenagers are imprisoned for refusing to serve in the military on grounds of conscience. Natan Blanc, 19, from Haifa has been imprisoned eight times in four months for his refusal to serve in the Israeli Defense Force (IDF). Amnesty International considers those imprisoned for total or selective objection to military service for reasons of conscience to be prisoners of conscience. Blanc spoke to Amnesty International about his motivation for objecting to military service in February 2013. END_OF_DOCUMENT_TOKEN_TO_BE_REPLACED

END_OF_DOCUMENT_TOKEN_TO_BE_REPLACED

Abdallah Abu Rahme is affable and articulate.  Last July, when I called to set up a time to talk before one of the weekly protests in his village, Bi’lin in the occupied West Bank, he made jokes and explained exactly the best way to get there from Jerusalem through all the checkpoints and roadblocks.

Abdallah’s vocation is teaching, but what takes up a good portion of his time is his involvement with the village’s non-violent popular committee which protests the wall/fence built by Israel that snakes through the occupied West Bank (WB).  Israel says the wall is being built for security reasons; others that the wall is simply strangling villages’ economies by cutting them off from their agricultural lands and water sources.

The International Court of Justice ruled in 2004 that the wall is illegal where it sits on Palestinian territory and should be removed.  Eighty percent of the wall is built on Palestinian territory, but five plus years later, most of the wall continues to sit  and be built on Palestinian land.  Popular committees have sprung up across the WB to protest the wall and over the past 18 months, there appears to be an increase in the harassment and prosecution of activists involved in this and other non-violent actions.

END_OF_DOCUMENT_TOKEN_TO_BE_REPLACED

Human Rights Watch (HRW) this week released a report detailing the unlawful killings and torture of Palestinians by Hamas during the recent Gaza conflict. This report confirms Amnesty’s own findings, published in February, of instances where Hamas murdered and tortured Palestinians. They accused the victims of “collaborating” with Israel, or the victims were members of opposing Palestinian parties, including Fatah.

The HRW report provides a more in depth analysis of the situation. The report claims that Hamas forces and masked gunmen alleged to be members of Hamas extra-judicially executed more than 30 people since December and injured dozens more by shooting them in the leg. Those responsible must be held accountable for their actions and the government of Hamas should address these crimes. According to HRW, the Hamas authorities have begun investigations into only four of these cases, but more needs to be done. Hamas should work to uphold international law and protect human rights as it has said that it will do.