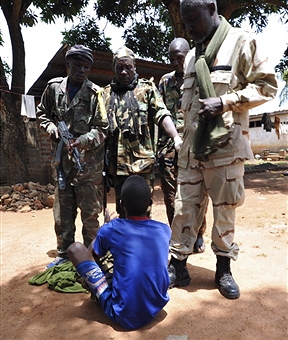 END_OF_DOCUMENT_TOKEN_TO_BE_REPLACED

When Egypt opened the Rafah crossing into Gaza, much of the coverage fell into two camps: One raising warnings that the opening would ease transit for armed groups and lead to a rise in terrorism, the other praising it as changing the humanitarian crisis.

More than half of Gaza's population are children.

A month later, what evidence we have seen is that the former hasn’t occurred but hopes for the later was overstated.  The humanitarian crisis in Gaza hasn’t changed significantly at all.

This shouldn’t be surprising.  The Rafah opening is the only opening between Gaza and Egypt.  It was never designed to carry commercial and humanitarian traffic, and the ability to bring commercial items, food and other goods through the single crossing is extremely limited.

END_OF_DOCUMENT_TOKEN_TO_BE_REPLACED

Last Friday, January 2, Amnesty International USA released its first major action of the year, calling on all Amnesty members and concerned citizens to write to Secretary of State Condoleezza Rice about the current violence in Gaza and southern Israel.  In that action, we called on four things:

So far, over 500 Palestinians and five Israelis have been killed. Yet despite those figures, the US continues to place the onus of blame solely on Hamas.  Below is a list of quotes by US officials that illustrate why Amnesty calls the US response “lopsided.”

As the letter to Secretary Rice states, “We expect the US government to share this concern for all unarmed civilians, be they Israeli or Palestinians, who are caught in this conflict, and we urge the US government to spare no effort to pressure all sides in the conflict to immediately cease indiscriminate or disproportionate attacks which cause civilians fatalities and casualties.”

Quotes on Gaza by US Officials

Harry Reid, Senate Majority Leader
Jan. 4, 2009- “I think what the Israelis are doing is very important. I think this terrorist organization, Hamas, has got to be put away. They’ve got to come to their senses.”

Howard L. Berman, Chairman, Foreign Affairs Committee
Dec. 27, 2008- “Israel has a right, indeed a duty, to defend itself in response to the hundreds of rockets and mortars fired from Gaza over the past week. No government in the world would sit by and allow its citizens to be subjected to this kind of indiscriminate bombardment. The loss of innocent life is a terrible tragedy, and the blame for that tragedy lies with Hamas.”

Nancy Pelosi, Speaker of the House
Dec. 27, 2008- “Peace between Israelis and Palestinians cannot result from daily barrages of rocket and mortar fire from Hamas-controlled Gaza. Hamas and its supporters must understand that Gaza cannot and will not be allowed to be a sanctuary for attacks on Israel. The United States must continue to do all it can to promote peace in the region and a negotiated settlement to differences between Israelis and Palestinians. Humanitarian needs of all innocent civilians must also be addressed. But when Israel is attacked, the United States must continue to stand strongly with its friend and democratic ally.”

Michael Bloomberg, Mayor, New York City
Jan. 4, 2009- “I think I speak for an awful lot, almost all Americans, who think that Israel is doing the right thing in defending itself.” Asked about the suffering of the Palestinians in Gaza, Mr. Bloomberg replied sharply: “That they are putting people at risk is an outrage. If Hamas would focus on building a country instead of trying to destroy another one, then those people would not be getting injured or killed.”

George W. Bush, President of the United States
Jan. 2, 2009- “This recent outburst of violence was instigated by Hamas — a Palestinian terrorist group supported by Iran and Syria that calls for Israel’s destruction […] In response to these attacks on their people, the leaders of Israel have launched military operations on Hamas positions in Gaza. As a part of their strategy, Hamas terrorists often hide within the civilian population, which puts innocent Palestinians at risk. Regrettably, Palestinian civilians have been killed in recent days […] Another one-way ceasefire that leads to rocket attacks on Israel is not acceptable. And promises from Hamas will not suffice — there must be monitoring mechanisms in place to help ensure that smuggling of weapons to terrorist groups in Gaza comes to an end. I urge all parties to pressure Hamas to turn away from terror, and to support legitimate Palestinian leaders working for peace.

Condoleezza Rice, Secretary of State
Jan. 2, 2009- “I want to begin by noting that Hamas has held the people of Gaza hostage ever since their illegal coup against the forces of President Mahmoud Abbas, the legitimate President of the Palestinian people. The Hamas has used Gaza as a launching pad for rockets against Israeli cities and has contributed deeply to a very bad daily life for the Palestinian people in Gaza, and to a humanitarian situation that we have all been trying to address. But frankly, Hamas has made it very difficult for the people of Gaza to have a reasonable life. We are working toward a cease-fire that would not allow a reestablishment of the status quo ante where Hamas can continue to launch rockets out of Gaza.

Write to Secretary of State Rice asking her to call for the protection of all civilians and an end to unlawful attacks.

The DRC, Zimbabwe, Cambodia, Sudan and Nicaragua–all these countries are in crisis right now. How do I know (beyond working at Amnesty International)? I can read about it in the news.

But there is at least one developing humanitarian crisis you won’t find in the New York Times:

More than 300,000 people have been displaced in Sri Lanka by fighting between the Tamil Tigers and government forces. And not only do they lack access to basic food and shelter, but the government is not allowing U.N. aid convoys to bring in desperately needed supplies.

The entire population of Birkenhead has basically been relocated  to the Wanni region of Sri Lanka, and now serve as a buffer–a human shield–between themselves and the government. The displaced don’t have shelters, and it’s monsoon season. They aren’t allowed to leave.

And why aren’t you hearing about it? Aid workers and journalists have been denied entry to the region. This video includes rare photos from the region just before access was cut off.