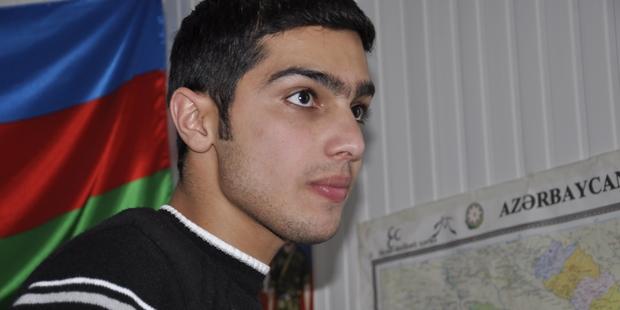 END_OF_DOCUMENT_TOKEN_TO_BE_REPLACED

When we found out that Gambia was to break a 25 year moratorium on the death penalty by starting an execution spree last month, Amnesty activists went into overdrive.  Supporters sent over 30,000 messages to President Yahya Jammeh and rallied around the world to stop the mass killings of prisoners – many convicted after unfair trials.

Last Friday we got good news:  President Jammeh heard our call and announced the suspension of executions following “numerous appeals” at home and abroad.

The bad news? The halt may be temporary.  The President’s statement said:
END_OF_DOCUMENT_TOKEN_TO_BE_REPLACED

END_OF_DOCUMENT_TOKEN_TO_BE_REPLACED

Those are some pretty amazing reasons to participate, but in case you need more, here are my top ten reasons to Write for Rights: END_OF_DOCUMENT_TOKEN_TO_BE_REPLACED

On Friday 22 July, thousands of activists from 14 different countries worldwide will come together to raise awareness of the deteriorating human rights situation in Gambia.

The demonstrations will happen on a public holiday that President Jammeh created to honour himself.

The global demonstrations coincide with a national holiday called ‘Freedom Day’ that current Gambian president Yahya Jammeh created to commemorate the day he assumed power in 1994.

Even though ‘Freedom Day’ is around the corner, that didn’t stop Gambia’s government from charging former Gambia Press Union President Ndey Tapha Sosseh and four other activists this week on trumped up charges of treason.

END_OF_DOCUMENT_TOKEN_TO_BE_REPLACED

The following comes to us from Essa Bokarr Sey, the former Ambassador of the Republic of The Gambia to France (1999-2001) and to the United States (2002-2003). We asked him to share with us his perspective on The Gambia today, in light of this week’s Day of Action for Ebrima Manneh. To learn more about Amnesty International’s concerns about human rights in The Gambia, click here.

President Yahya Jammeh of The Gambia monopolizes power with excessive force. In The Gambia of today being an opposition or exercising one’s right towards freedom of expression is a considered social taboo. Fear is ruling our people without limits or respect for the rule of law.

In The Gambia three scary names are used to maintain the brutal Jammeh regime in power.

1) The NIA (National Intelligence Agency) is first on the list. It is known for abducting, torturing and killing Gambians who dare show their difference in political opinion before the regime’s modus operandi. The NIA was established as soon as the Jammeh regime came into existence based with reference to decrees that were promulgated by the Armed Forces Provisional Ruling Council. These special decrees empowered the NIA to arrest any Gambian upon suspicion and keep him or her for days without trial. They are still in full force. The latter contradicts the very essence of the Gambia constitution. Worst of all the NIA is directly answerable to the minister of defense who is President Jammeh, him being the hub of all abuses with the excessive use of power.

2) The state guard is a special squad composed of thugs and killers who run along the length and breadth of the country with unmarked vehicles. The latter can visit the residence of any Gambian at any time then abduct and incarcerate him or her while using harsh torture methods. Their callous and brutal methods started mushrooming from 1994 November 11 when officers of the Gambia National Army were summarily executed. Over the years many more were killed like former Lt Seye, former state guard commander Lt Almamo Manneh and others. Killings that are based on nothing other than speculation or whirling accusations which usually reflects suspicion from a paranoid leadership. These are crime scenes where clear indications have so far implicated the state guard beyond any reasonable doubt.

3) Third are the different locations where those abducted or kidnapped are kept incommunicado. The most dangerous are: Mile two central prisons, Jeshwang prisons, Jangjangbureh Prisons (an isolated island) where torture could include being exposed to mosquito bites and excessive heat in dark cells. Within the NIA premises also are dark dungeons like the Bambadinka–meaning the crocodile’s hole.

These three scary names are the pillars of President Jammeh’s regime of brutality. This is exactly why journalists like Ebrima Manneh are helpless and vulnerable. No single person can ever determine where detainees are kept with precision because the regime’s tactics includes transferring detainees from one undisclosed location to another only to escape inquiries from family members of the affected parties.

Refusing detainees access to legal representation and or visits from family members is definitely not uncommon in The Gambia today. The Jammeh regime exercises its strength by showing the detained and the family of the detained that absolute power lies in its hands but not within the hands of the judiciary. Court orders are not respected because re-arresting people who have been freed by a judge just outside the premises of the court house has been part of the regime’s merciless reactions during the past years. Indeed the above cannot be part of the modus operandi of a democratic regime. Therefore any regime which practices what is referenced here above is one that has no respect for the rule of law. That is why Gambians are scattered all over the world as asylees or refugees. Our country’s population is one of the smallest in Africa, however, the number of Gambians on exile is on top of the list in the continent. That certainly should be a cause for concern.

The recent report of Amnesty International entitled Gambia: Fear Rules speaks for itself. This same vein is the reason why six senators from the US senator on foreign relations signed a petition calling on the Gambian president to release Chief Ebrima Manneh. These are respected institutions who have no interest in staining the Jammeh regime for political reasons or any other one for that matter. Veterans like Senator Ted Kennedy are of course not into this for making names or controlling anything political. They are in it because what affects human life in The Gambia or any other part of the world attracts the attention of responsible leaders like the latter. President Jammeh’s legacy has already been stained like that of Idi Amin Dada and other former blood thirsty dictators. Along the way he will face his fate because international laws supersede the local Gambian laws he is manipulating to help maintain his ruthless regime.