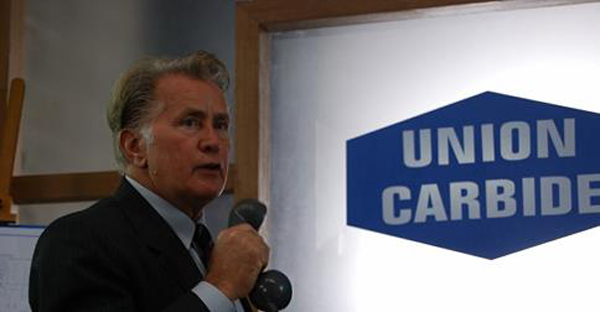 Bhopal – A Prayer for Rain releases in the US on November 7th.

My name is Ravi Kumar, director and co-writer of the film Bhopal-A Prayer For Rain. I want you to take a second and imagine what your life would be like today if your parents not only died in an industrial disaster that could have been avoided, but those responsible had evaded punishment for 30 years.

What is an impossible thought for me, is a horrifying reality for the families of more than 20,000 women, men, and children who have died following the 1984 toxic gas leak at the Union Carbide pesticide plant in Bhopal, India. END_OF_DOCUMENT_TOKEN_TO_BE_REPLACED

END_OF_DOCUMENT_TOKEN_TO_BE_REPLACED

A commissioner for a body monitoring the sustainability and ethics of the London 2012 Olympics has resigned over its links with Dow Chemical, the company mixed up in one of the worst corporate related human rights disasters of the 20th century.

Meredith Alexander is quitting the Commission for a Sustainable London 2012. It describes itself as an independent body which “monitors and assures the sustainability of the London 2012 Olympic and Paralympic Games.”

Ms. Alexander, who is Head of Policy for the charity ActionAid, told BBC’s Newsnight why she was resigning:

“I feel I was part of a lobby which legitimized Dow’s claims that it had no responsibility for Bhopal…This is an iconic case. It’s one of the worst abuses of human rights in my generation and I just could not stand idly by.”

END_OF_DOCUMENT_TOKEN_TO_BE_REPLACED

The International Olympic Committee loves to think of their event as a not just a sporting event, but as a tool for furthering peace and social justice around the world. Furthermore, The Olympic Committee’s guidelines on sourcing are meant to place a high priority on environmental, social and ethical issues when contracting for the Games.

But how then can London’s 2012 Olympic Games justify giving chemical giant Dow Chemical a high profile contract in light of Dow’s failure to address one of the worst corporate related human rights disasters of the 20th century? You can tell the Olympics’ leadership about the legacy of Bhopal that Dow Chemical refuses to address and ask them why they ignored this tragedy when giving this juicy contract to Dow Chemical.

END_OF_DOCUMENT_TOKEN_TO_BE_REPLACED

As I mentioned earlier in the week, US President Barack Obama is in India.  At this very moment, he’s in New Delhi after a day in India’s financial center of Mumbai.  Now is the time to call the White House and tell them that you want justice for the victims of the 1984 Bhopal gas leak from a plant operated by a US based company now owned by Dow Chemical.

The International Campaign for Justice in Bhopal (ICJB), a partner of AI’s efforts to seek redress for the victims of this awful gas leak, aims to get Bhopal on the agenda for Obama’s visit, so Bhopalis will be staging a day-long sit in, and ICJB is organizing an international solidarity call in action to support them.

AIUSA has been an integral part of the coalition for justice for the people of Bhopal.  In fact, just before Obama left for India, Amnesty International issued a letter to the White House saying in part that

“It is essential that your administration and the Government of India cooperate to ensure that  those accused of causing the Bhopal disaster, including UCC, are made to face trial, and that Bhopal survivors are able to obtain redress.”

Please join Amnesty International USA’s Corporate Action Network and the South Asia Regional Action Network in helping to promote the ICJB action today and in the future. We are asking AIUSA supporters to call the White House comment line and express their concern for Bhopal.

Dear friends: Today I am asking concerned citizens worldwide act in solidarity with the survivors of the 1984 Bhopal, India Gas Disaster who staged a protests in New Delhi today. While Obama is in India, we would like him to properly address the unresolved human rights crisis and support real justice for the people of Bhopal. Please call the White House comment line to make this request: (202) 456-1111.  If we all take action together, maybe he’ll realize how many people feel that his Administration’s position on Bhopal needs to change. More information at http://www.studentsforbhopal.org/raiseyourvoice.  Thank you for your continued support!

Thank you for supporting Bhopal’s human right to health and a clean environment.  If you want more resources on AIUSA’s work on Bhopal, just ask down in the comments.

Last week President Obama and Prime Minister Singh met to discuss U.S.-India relations; it was the first state visit of President Obama’s administration. According to news reports, the two heads of state discussed working together as natural allies on intelligence issues as well as energy security, clean energy, agriculture and climate change issues. Did President Obama use this opportunity to also address human rights concerns in India? And in particular, did they discuss Bhopal?

Twenty-five years ago, a toxic gas leak at Union Carbide’s pesticide plant in Bhopal, India caused more than 7,000 immediate deaths. Since then, 25,000 people have died and 100,000 suffer from ongoing health problems. Let me be more specific. The survivors and their children, a second generation of survivors, live with debilitating illnesses including cancer and birth defects. The plant site has not been cleaned up. Toxic wastes continue to pollute the environment and ground water. No one has been held accountable, despite years of legal proceedings in both the Indian and U.S. court systems. In short, survivors have been denied adequate compensation, medical care, rehabilitation of disaster site, and justice.

In India last week, the biggest daily newspapers — The Deccan Herald, The Telegraph, and The Times of India — all reported on the Indian government’s flawed decision to mark the 25th anniversary by opening the Bhopal disaster site to the public.