Colombian women have been systematically raped or sexually assaulted for variety of purposes, including intimidation, humiliation, forced-displacement, extracting information, and rewarding soldiers. Rape and sexual violence have been also used as a strategy to assert social control, and a weapon against women’s rights defenders who raise their voices in support of land restitution. END_OF_DOCUMENT_TOKEN_TO_BE_REPLACED 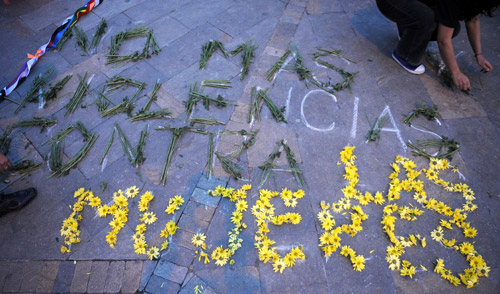 END_OF_DOCUMENT_TOKEN_TO_BE_REPLACED

In the last two weeks, Francisco Pineda and Everto González, two members of the community council of Caracolí in north-west Colombia, were subjected to enforced disappearance by paramilitaries. They were both picked up by a group of paramilitaries, who took them away to “resolve some land issues.”

Pineda and González have not been heard from since, and their whereabouts remain unknown. Amnesty International fears their lives and the lives of other members of the Afro-descendant community may be at risk, and has issued an Urgent Action on their behalf.

END_OF_DOCUMENT_TOKEN_TO_BE_REPLACED

Colombian President Juan Manuel Santos signs a compensation law for the victims of the armed conflict and to restore the land to displaced farmers. (EITAN ABRAMOVICH/AFP/Getty Images)

Colombia recently passed the landmark Victims and Land Restitution Law (“Victims’ Law”), which President Santos sees as so important as to define his career. “If I accomplish nothing else, this will have made my presidency worthwhile,” he said.

The legislation will soon give an estimated 4 million people the right to seek reparations for the crimes they have suffered as a part of Colombia’s almost 50-year long war.

END_OF_DOCUMENT_TOKEN_TO_BE_REPLACED

Ten out of the country’s 11 Justices were present for the ruling, which involved two LGBT civil rights cases. The unanimous verdict states that partners in same-sex unions have the same rights as heterosexual unions.

According to Justice Ellen Gracie:

“The recognition made by the court today responds to the rights of a group of people who has long been humiliated, whose rights have been ignored, whose dignity has been offended, whose identity was denied, and whose freedom was overwhelmed.”

The decision has enormous implications for same-sex couples, who will now have access to the same rights that heterosexual couples have long enjoyed, including rights of inheritance, tax deductions, adoptions and immigration.

END_OF_DOCUMENT_TOKEN_TO_BE_REPLACED

House Resolution 1224, currently in the US House of Representatives, would bring the population of internally displaced peoples (IDPs) in Colombia one step further towards ensuring that their human rights are upheld.

The incidence of displacement in Colombia is not something to be overlooked – it is one of the highest in the world. Between 3 and 4 million people have been forced to flee their homes and seek refuge elsewhere in the country; a further 500,000 are believed to have fled to neighboring countries.  Even worse, is that a disproportionate number of these internally displaced are indigenous peoples, afro-descendants and campesino communities. Displacement has forced these rural dwellers to migrate to large urban areas and it has drastically increased the number of people living in city slums.

In 2004, the Colombian Constitutional Court issued two declarations calling for the Colombian government to protect IDPs and their human rights (see pages 9-18). Unfortunately, the government of Colombia has yet to implement these recommended public policies and IDPs in Colombia continue to suffer. More people are continuously forced from their land, more people are discriminated against, and more poverty exists.

37 Representatives have signed onto this resolution, but more support is needed! Contact your local Representative to bring the millions of internally displaced Colombians one step closer to justice.