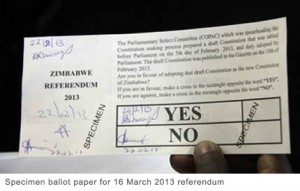 Zimbabwe voted Saturday on whether to adopt its first constitution. Until now, the country operated under a vastly revised document called the Lancaster House Agreement, the de-colonization plan between Rhodesia and the UK. Despite poor turn-out and general apathy for the process, poll monitors initially indicated the constitution would be adopted with a substantial “yes” vote and the Zimbabwe Election Commission just affirmed.

There were incidents of intimidation reported; however, as the day progressed, so did arrests. On Sunday, four officials in the MDC-T political party were arrested. Beatrice Mtetwa (A personal hero of mine-if you’ve ever met her, know of her work, or met any of the multitudes of people she defends in the battle for human rights and dignity, you understand why.) was also arrested for obstruction of justice when she arrived at the police station to serve as their attorney. The irony of arresting a woman fighting for justice for obstruction by those who consistently obstruct it is not lost on me. As of this writing, she is still detained by the police-in defiance of a judicial court order demanding her release. Beatrice and the others appeared in court this morning for a bail hearing and Beatrice will remain in jail until another hearing tomorrow at 11:15 a.m. Harare time.

END_OF_DOCUMENT_TOKEN_TO_BE_REPLACED

Zimbabwe gets a lot of bad press, but not many are aware of some of the amazing people making a difference there every day. These are people, who usually at great personal risk, fight for human rights, civil liberties, justice, equality and a better Zimbabwe for all. So here’s a shout out to some personal heroes of mine and I hope you are equally inspired.  (Feel free to share stories about other amazing human rights heroes in Zim or southern Africa in general in the comment section.)

Betty Makoni
Betty is a teacher who got tired of hearing about the relentless sexual abuse of young girls and decided to do something about it. She started the Girl Child Network in Zimbabwe to provide a safe place, healing and support for young girls surviving sexual assault. Many of the girls were victimized because of a belief that sex with a virgin cures AIDS. As a result of her efforts, Betty has been targeted by security forces in Zimbabwe and forced to flee the country for her safety. A documentary film tells the story of Betty and the girls she helps. Betty has also been nominated as CNN’s Hero of the Year. You can vote for Betty on CNN’s web site until November 19th. Vote early and often! END_OF_DOCUMENT_TOKEN_TO_BE_REPLACED