The UK and Australian governments are probably more out of touch than any other leaders globally: an astonishing 87% of British people and 85% of Australians are ready to invite refugees into their countries, communities – even their own homes.

China, Germany and the UK are the most welcoming

We created a ranking based on our survey results, called the Refugees Welcome Index. China comes out on top, with almost half of those we spoke to saying they would accept refugees in their own home. Russia, Indonesia and Thailand – which thousands tried to reach by boat after fleeing Myanmar last year – came bottom of the list. People in Germany and the UK are also taking the refugee crisis particularly personally, ranking second and third as the most welcoming.

Almost a third of people in the UK – 29% – are willing to open up their own homes to refugees. Another 47% would let refugees live in their neighborhoods.

An incredible 96% of Germans, who made room for 1 million people in the last year, are still open to the idea of hosting more. In Jordan, a small country already hosting over 600,000 refugees from Syria, 94% feel the same way.

Governments should start pulling their weight

Almost 3 in 4 people worldwide – 73% – agree that people should be able to take refuge in other countries to escape war and persecution. This feeling is particularly strong in Spain (78%), Germany (69%) and Greece (64%). Our survey results are overwhelmingly positive – but most governments still just aren’t listening.

Only nine of the 27 countries covered by our survey have committed to taking in any of Syria’s 4.8 million refugees. But they have only agreed to share fewer than 174,000 people between them. 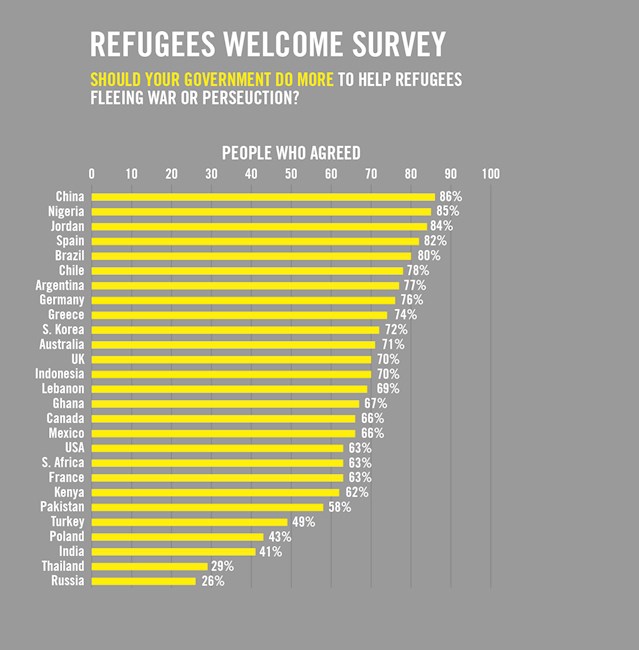 Another four countries in our survey – Turkey, Jordan, Greece and Germany –are hosting millions, with very little help from other countries. Because most governments still pretend that protecting refugees is somebody else’s problem.

Their attitude is badly out of touch with the inspiring “can do” attitude among their citizens.

Our survey shows that politicians have run out of excuses not to do their fair share: Instead of chasing headlines with anti-refugee rhetoric, they should be making brave decisions.

They can start by agreeing to share responsibility for those refugees who need help most, at the World Humanitarian Summit in Turkey on 23-24 May.

Amnesty is pushing for more than 1 million refugees to be resettled by the end of 2017.It’s not going to be simple, or easy, but as our survey shows, thousands of people stand ready to roll up their sleeves and pitch in to welcome refugees. Take action now!

3 thoughts on “4 in 5 People Worldwide Say: ‘We Welcome Refugees’”