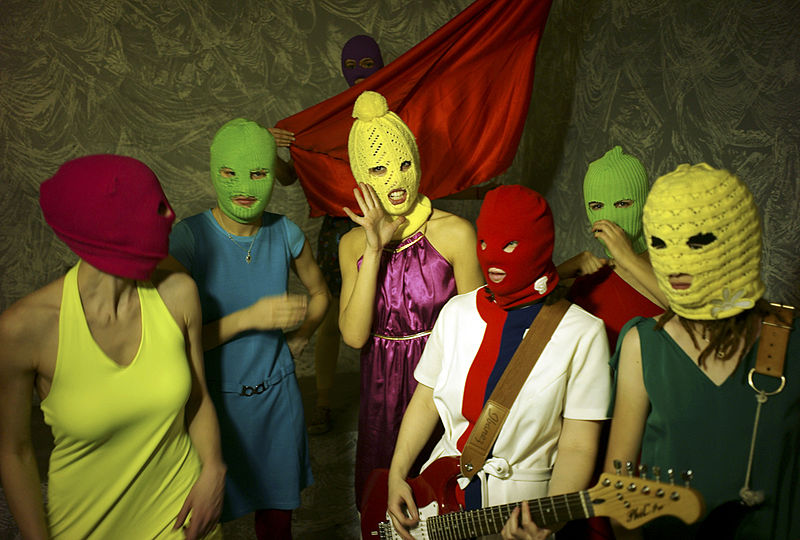 Three young women in Russia may spend seven years in prison for “hooliganism” after a flash punk rock performance at a Moscow church that criticized President Vladimir Putin.

Nadezhda Tolokonnikova, Maria Alekhina and Ekaterina Samutsevich, alleged members of the controversial band Pussy Riot, were arrested in March 2012 and are being held in pre-trial detention following the politically-fueled performance at Moscow’s famed Cathedral of Christ the Saviour.

Egyptian air is good for the lungs / Do Tahrir on Red Square!

While the three women deny any involvement in the protest (band members cover their faces with balaclavas) even if they took part, the severity of the response by Russian authorities is not justifiable to the peaceful – even if to many, offensive – expression of their political beliefs.

Pussy Riot is a Moscow-based anonymous feminist band that, for the last year and a half, has played unauthorized “flash performances” to protest government policies (watch them in action here).  Pussy Riot’s members use their right to freedom of speech – through music – to shed light on what they perceive to be a corrupt government. In an interview with the Guardian, band member “Garadzha” explains:

“We understood that to achieve change, including in the sphere of women’s rights, it’s not enough to go to Putin and ask for it. This is a rotten, broken system.”

Her bandmate “Tyurya” goes on:

“The culture of protest needs to develop. We have one form, but we need many different kinds.”

They hope that through their music and performances – like the generations of musician activists worldwide who’ve come before them – they can inspire change in their country. Cathedral Of Christ The Saviour

So what was it about their most recent performance that persuaded the government to potentially lock the women up for seven years? The song, “Virgin Mary, Redeem Us of Putin,” calls on the Virgin Mary to become a feminist and banish then Russian President-elect Vladimir Putin. It also criticized the dedication and support shown to Putin by some representatives of the Russian Orthodox Church. The performance was part of wider protests against Putin and unfair elections in Russia.

The hooliganism charge against Pussy Riot is overblown and isn’t really about disrespecting the Orthodox Church, but for challenging the return of Vladimir Putin to the Russian presidency. Using a church that was once destroyed because of intolerance to advance a governmental policy of intolerance for dissent is unacceptable.

The Cathedral of Christ the Saviour, the world’s tallest Orthodox Cathedral, where the performance occurred has its own tumultuous history with oppression and crack-down on free speech.  The late 19th century Cathedral was demolished in 1931, with other houses of worship throughout the Soviet Union, by the Stalin regime. The Cathedral was rebuilt in the early 1990s. While it deserves preservation and respect, so do the human rights of the members of Pussy Riot.

If you agree, tell the Russian authorities to drop the hooliganism charges against the arrested members of Pussy Riot.

20 thoughts on “Russia: Where a Punk Rock Performance Could Land You in Prison”