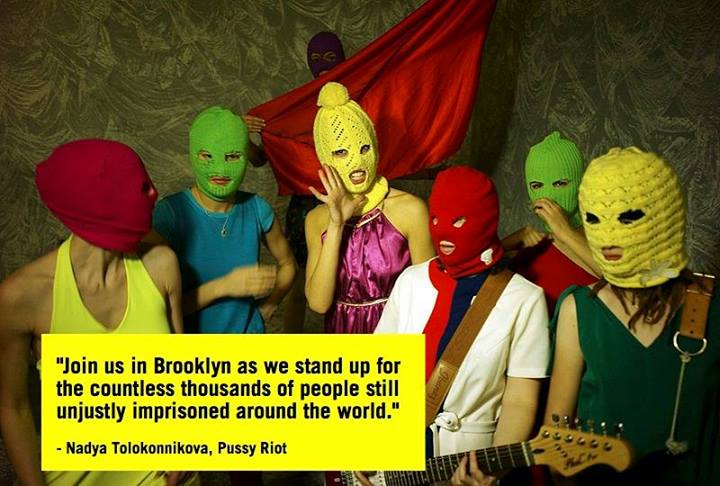 I just heard some great news, and I can’t wait to share it with you. I’m so excited to announce that on Feb. 5th, Pussy Riot’s Nadezhda “Nadya” Tolokonnikova and Maria “Masha” Alekhina will participate in Amnesty International’s landmark Bringing Human Rights Home Concert at Barclays Center in Brooklyn.

I know the ability of music to move mountains. During my time as an activist in apartheid South Africa, singing together helped unite us in the streets, and helped demonstrate our power. Cries of “Amandla!” echoed through the townships and cities alike, and I knew I needed to join in. At the same time, protest songs rang across the world with powerful messages that amplified the voices of the anti-apartheid movement.

Music helped move me to stand up for human rights when I was younger, and there are few who have shown the world the power of art and activism more over the last few years than Nadya, Masha, and the rest of Pussy Riot. Hundreds of thousands of us here in the United States, and millions around the world chose to take action and demanded their release by signing petitions, tabling on campuses, and organizing punk concerts. When Nadya and Masha walked free just one month ago, my hope in our movement soared. That’s why it’s so amazing that they will be with us on February 5. Right now, as thousands around the world remain locked up simply for expressing who they are or what they believe, as people continue to languish on death row, and as people in our own communities face human rights abuses daily, the power of our movement has never been more needed. And it is that power of solidarity that we are reigniting with the Bringing Human Rights Home Concert.

Between 1986 and 1998, Amnesty International held 28 concerts around the world with over 1.25 million attendees. Those concerts directly helped triple the movement’s worldwide membership and mobilize a generation of human rights activists.

Today, it’s incredible for me to see artists continuing to speak out for human rights for all. Just as Bruce Springsteen, Stevie Wonder, U2 and Peter Gabriel lent their voices to call for an end to apartheid in the 1970s and 80s, artists such as the Flaming Lips, Imagine Dragons and Ms. Lauryn Hill are joining us now to raise awareness about Prisoners of Conscience. The people we are standing with are jailed solely for the peaceful expression of their beliefs or political views, or for their sexual orientation, gender identity, ethnic origin, economic status or even for the color of their skin, and Amnesty has championed their rights for over 50 years. Pussy Riot’s Nadya and Masha are ready for Brooklyn! So are Imagine Dragons, Ms. Lauryn Hill and so many more! Are you?

“We are happy to support Amnesty International’s work on behalf of human rights and political prisoners,” Nadya and Masha recently told us in a joint statement. “We, more than anyone, understand how important Amnesty’s work is in connecting activists to prisoners.

“A month ago, we were freed from Russian prison camps. We will never forget what it’s like to be in prison after a political conviction. We have vowed to continue helping those who remain behind bars and we hope to see you all at the Amnesty International concert on February 5th in Brooklyn!”

Pussy Riot’s songs of protest have mobilized a new generation of activists to stand together for freedom of expression. I’m honored that they will address all of us in the crowd in just two weeks. Will you be there to hear their story, and their message of hope and freedom?

I hope to see you there! More information on the upcoming concert can be found at http://www.amnestyusa.org/Feb5concert, and tickets are on sale now through Ticketmaster.