Imam Baba Leigh decried the August executions of nine death row inmates in The Gambia. Several months later, he was seen leaving his home with two intelligence agents who were taking him to their headquarters for further questioning. He has not been seen since. 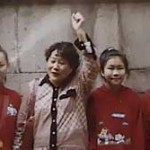 Mao Hengfeng is a relentless advocate for reproductive rights and against forced evictions in China. Because of her work, she has repeatedly been sent to “Re-education Through Labor” (RTL) camps and tortured so severely that doctors found bleeding in her brain. She was sentenced to 18 months of RTL in October for her participation in commemorative activities for deceased petitioners. Her location remains unknown and her family is unable to send her clothes and money.

5. Being a conscientious objector. U.S. servicewoman, Kimberly Rivera, was ordered to Iraq in 2006. While she was on leave the following year, she determined she could no longer morally participate in the war or in any other conflict. She went absent without leave to Canada to avoid being sent back to Iraq, but was deported back to the U.S. after her application for refugee status was rejected. She subsequently arrested and detained by U.S. military authorities on September 20, 2012. Kimberly faces the possibility of a court martial for desertion and if convicted, could face up to five years in prison.

Antonio Rodiles, a Cuban activist, lawyer and journalist, was arrested in November 2012 when he went to the Cuban State Security headquarters in Havana to inquire about the arrest of an independent lawyer and journalist, Yaremis Flores. He was knocked to the ground and pinned down by four plain clothed men, then charged with “resisting authority.” He has since been released.

In El Salvador, “Mery” sought a clandestine induced abortion using medication at her eighth week of pregnancy. She became worried about some of the symptoms she was experiencing, and sought medical help at a hospital. The medical staff reported her to the police since abortion is criminalized in all circumstances in El Salvador. Mery was arrested immediately and handcuffed to the stretcher by police, even while she was still receiving emergency medical care. She was subsequently convicted and sentenced to two years in prison for having had an induced abortion. Mery’s mental health deteriorated to such an extent that she attempted suicide, and she is currently under detention at a psychiatric unit, where some of the guards have insulted her, calling her a murderer.”

8. Uploading and sharing a video on the Internet. Saber Ayad of Egypt was arrested on September 13 after angry groups of men surrounded his house and called for his death, accusing him of heresy, atheism and promoting Innocence of Muslims – a short film regarded by many to be offensive, as it portrays the Prophet Mohammad and Islam in a negative light. Police waited a full day to respond to a distress call from Saber Ayad’s mother. When they arrived, they arrested Saber Ayad, confiscating his personal computer and CDs. He was convicted of “defamation of religion” on Dec. 12 and sentenced to three years in jail after an unfair trial and a verdict that Amnesty called “outrageous and a threat to freedom of expression.” While in pre-trial detention, Saber was held near a collapsed sewer.  His letters to family and friends were confiscated.

Nguyen Van Hai co-founded the independent Free Vietnamese Journalists Club. He denounced China’s foreign policy on Viet Nam and participated in peaceful protests. Along with Ta Phong Tan and Phan Thanh Hai, he was a pioneer in using online social networks to expose corruption and advocate for human rights in Viet Nam. On 24 September, a court in Viet Nam’s Ho Chi Minh City sentenced Nguyen to 12 years in prison, Dieu to 10 years and Ta and Phan to four years for “conducting propaganda” against the state. Three members of the feminist punk group Pussy Riot were found guilty of “hooliganism” after performing a protest song at a Moscow Cathedral. Two of the women were sent to notoriously brutal penal colonies far from Moscow to serve their 2-year sentences.

These are just 10 of the arrests and sentences that stood out this year. It’s far from an exhaustive list—every year, people are arrested and thrown in jail for exercising their basic human rights. Your support of Amnesty International helps bring their stories to light to ultimately seek their freedom.