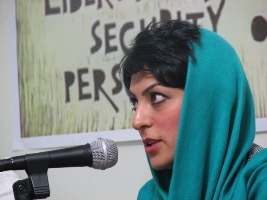 This is the fifth year that Amnesty International USA is doing a Nowruz Action so that those languishing in Iran’s prisons can also partake in the holiday. Please take time to send a Nowruz greeting to a prisoner in Iran or their family to let them know that they are not forgotten, and that people in other countries are thinking about them. It is such a small thing to do, but it will mean so much to our friends in Iran at this time. Please open the action, read about the cases, and then send greeting cards to the addresses provided.

You will also be sending a clear message to the Iranian authorities that the world is watching them. Believe it or not, the Iranian government cares very much what people around the world think of them.  After an international outcry over the death sentence handed down to Pastor Youcef Naderkhani, who was convicted of “apostasy” for having converted from Islam to Christianity, the authorities backed down, overturned his sentenced and released Pastor Naderkhani this past September. If the Iranian authorities didn’t care about their international image, we would not have been treated to the strange spectacle of Mohammad Javad Larijani (the head of Iran’s Human Rights Council) giving an impassioned but utterly disingenuous (and unconvincing!) response to the latest report of the UN Special Rapporteur on the Situation in Iran in Geneva on March 12.

This year we remember: the seven leaders of Iran’s Baha’i community; student activists Majid Tavakkoli, and Zia Nabavi; Kurdish rights activist Zeynab Jalalian; human rights attorneys Nasrin Sotoudeh and Abdolfattah Soltani; and journalist and women’s rights activist Shiva Nazar Ahari. Please take the time to send them a card today. You will be making such a difference in their lives! Thank you.