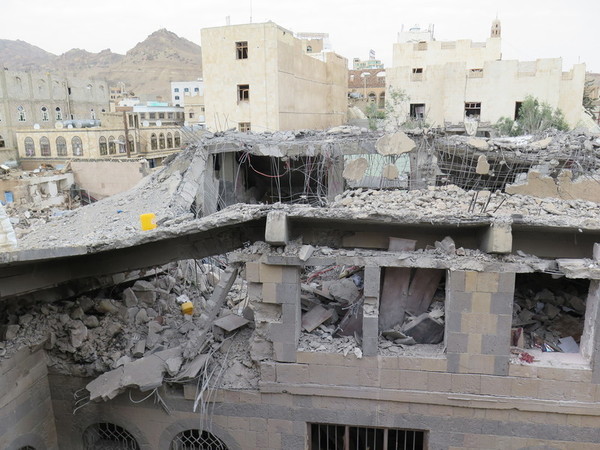 Destroyed home of al-Akwa family in which five civilians were killed in two consecutive airstrikes on 13 June 2015. (Credit: Amnesty International)

Despite more than 100 days of heavy fighting, the impoverished country of Yemen is facing a humanitarian crisis that you most likely haven’t heard of.

According to the UN High Commissioner for Refugees (UNHCR) estimates there are more than 21 million people – 80 percent of the population — in need of aid throughout the country. All essential supplies, from food to fuel to medical supplies, are in severe shortage.

According to recent UN data, there have been more than 1,400 civilian deaths and 3,400 civilian injuries in three months of the armed conflict. Many civilians have been trapped by the fighting between coalition of Houthi and former president Ali Saleh loyalists and the forces supporting current president Abd Rabbuh Mansur Hadi. Others have died or lost homes in the Saudi-led coalition bombing campaign against the Houthi.

Despite international humanitarian law, which clearly states that all possible steps must be taken to prevent or minimize civilian casualties, Amnesty International’s documentation indicates that the Saudi-led military coalition has done little to nothing to prevent such violations.

The Face of Suffering

At 3:45 a.m. on June 16, a Saudi airstrike of the Al-Mujaliyya neighborhood in Ta’iz killed 48-year old Jamila and four of her children. Jamila’s daughter Leila Hayel, who lost her mother and siblings Suha (10), Amal (14), Samah (23), and Hani (25), told Amnesty International about the incident. She lives 600 meters away from her parents’ house:

“The whole family had been staying in the Hawban neighborhood [east side of Ta’iz city] for the last two months because of the continuous fighting [between armed groups] in al-Mujaliyya. In fact, the majority of the residents have left the neighborhood. They had only returned home one week before the strike, in time for Ramadan. On that night, a bomb struck al-Arwa school, located 30 meters away from our house. Fearing for their lives, my family rushed to leave the house after the explosion. While my sisters and mother were putting on their abayas [long traditional dress worn outdoors] and my brother Hani was locking up the house, a bomb landed in the middle of the house. The force of the explosion sent my sisters and mother flying five meters, killing them instantly. Hani’s body was not dug out until 12 hours later. My father Faisal (60) was the only survivor.”

The situation in Yemen is so dire that in June before the UN sponsored meeting in Geneva, 13 humanitarian agencies called on the international community to support a lasting solution and prevent the loss of millions of lives. The United Nations has designated the humanitarian crisis in Yemen at level 3, which is the highest and most severe category.

The suffering of the people of Yemen does not seem to garner the attention that other similar events in other parts of the region. For example, when ISIS destroyed Palmyra shrines a UNESCO world heritage site, it was front-page news. Where is the outrage and attention when a Saudi-led coalition bombed and destroyed part of Sana’a Old City, another UNESCO world heritage site?

As a tweet from a Yemeni resident of Sana’a said,

“This is supposed to be the best month [Ramadan] of the year. But it’s like we’re in hell. Why is there no truce yet?”