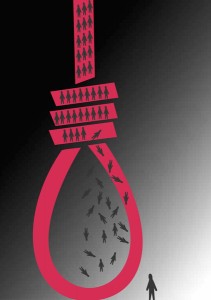 An Iranian man, identified by state media only as “Alireza M.,” was hanged and presumed dead, but discovered to be alive in a morgue by his family. Now, the authorities intend to reattempt the execution once his health “improves.”

Iran has been basking in the dubious distinction of being number two in the number of citizens it executes. It can’t quite compare to the perennial executions “champion” China, but Iran does likely have the highest per capita rate of executions of any country in the world.

This is not exactly an achievement to brag about.

We can’t be sure how many people Iran executes each year, but the latest reliable estimates are that as of this week, at least 508 people were executed in Iran so far this year. If the trend continues, Iran is well on the path to exceed in 2013 the minimum of 544 people it is believed to have executed last year.

An alarming 50 people were executed in just one two-week period in September. The number of those executed in 2013 includes juvenile offenders – those accused of committing their crimes before they were 18 years of age.

At least 508 people were executed in Iran so far this year. If the trend continues, Iran is well on the path to exceed in 2013 the minimum of 544 people it is believed to have executed last year.

”
The list of potentially capital crimes in Iran is quite long, but the majority of people are executed for their involvement in drug offenses. But the use of executions against people accused of politically motivated offenses exposes many of the entrenched flaws of Iran’s justice system: unfair trials, lack of due process, faulty use of evidence, use of torture to extract confessions, lack of representation and discrimination against ethnic and linguistic minorities.

In 2009, Ghazi Abbasi and six other members of Iran’s Ahvazi Arab minority community were arrested and accused of involvement in the shooting deaths of a police officer and a soldier. Abbasi and the others were accused of the crime of “Moharebeh” (enmity against God) which is often leveled against those accused of politically motivated offenses, as well as “Ifsad al-Ard” (corruption on earth). Their trial in a Revolutionary Court lasted just about two hours and their convictions were based on confessions that were extracted under torture. Abbasi and three of the other men were sentenced to death and are at risk of imminent execution.

In another case Jamshid Dehgani and three other members of Iran’s Kurdish minority – who face discrimination both because of their ethnicity and language as well as their adherence to Sunni Islam – were sentenced to death for committing a murder that occurred while they were in detention! This inconvenient fact did not prevent the Revolutionary Court from convicting them of Moharebeh and Ifsad al Ard. They also face imminent execution.

Concerned activists now have a chance to appeal to the Iranian authorities to ask them to overturn the death sentences against these members of minority communities accused of political offenses. Providing real justice for these men would be something the government CAN be proud of.

One thought on “Will This Man Be Executed Twice?”