Only hours later at the daily State Department briefing, Deputy Spokesperson Marie Harf forcefully countered questions about this article with “there has been no change in policy. Period.”

Well – to which U.S. policy was Ms. Harf referring?

The United States has two policies when it comes to Israel and weapons: On one hand, there’s the practice of giving Israel ‘carte blanche’ on weapons, monetary support and diplomatic shielding. On the other hand, there’s the official policy on arms transfers laid out by President Obama just this past January, reiterating the country’s respect for human rights in the strongest terms yet.

Obama’s Presidential Policy Directive (PPD-27) updated the U.S. Conventional Arms Transfer Policy, which sets out guidelines for U.S. arms transfers. PPD-27 asserts that it is a goal of U.S. policy to ensure that weapons transfers do not contribute to violations of international human rights or humanitarian law. Furthermore, it requires that certain criteria be taken into account for the approval of a proposed weapons transfer – including the human rights record of the recipient and the likelihood that weapons will be used in accord with international law. 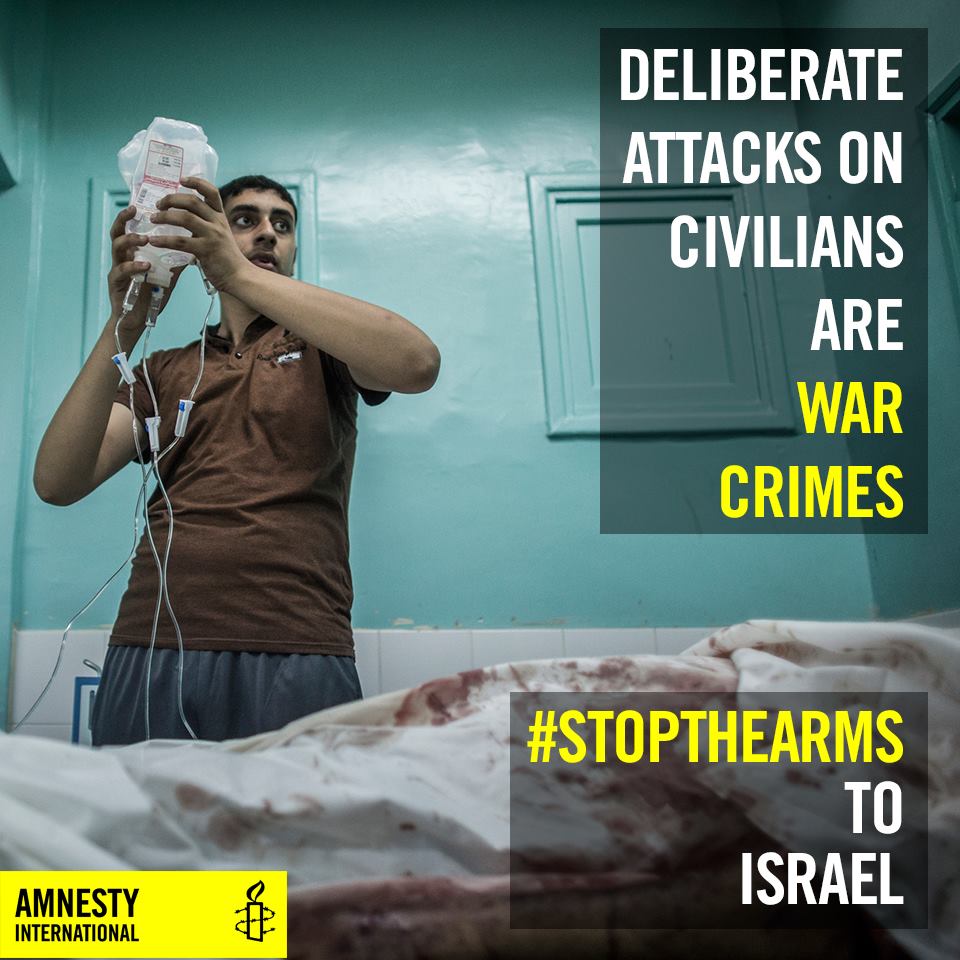 Unfortunately, there is good reason to doubt that Israel can be trusted to use U.S. weapons responsibly, in accord with U.S. policy and in compliance with international human rights and humanitarian law.

Over the years, Amnesty has repeatedly documented violations of international human rights and humanitarian law by Israel and linked them to U.S.-made weapons and munitions. During the most recent conflict between Israel and armed groups in Gaza, Amnesty has noted mounting evidence of war crimes including the deliberate targeting of medical personnel and facilities by Israel.

Yet, the U.S. has provided Israel with weapons that in the past have been linked to explicit violations, such as Hellfire missiles, and since early July, the U.S. has supplied Israel with imprecise arms that create an indiscriminate killing field wherever they land, such as grenades and mortar rounds. A shipment of jet fuel from the U.S., used in F-16s that are involved in airstrikes on Gaza with devastating collateral damage, just landed in Ashkelon, Israel August 13th.

U.S. culpability in war crimes is not a theoretical threat either. A lawsuit has been filed against Secretary of State John Kerry and Secretary of Defense Chuck Hagel for providing Israel with weapons involved in attacks on Gaza.

Amnesty encourages the U.S. to start enforcing its declared policy on weapons transfers – the one that ensures respect for human rights as spelled out in U.S. policy and in relevant international law.

Amnesty urges the U.S. government to immediately stop all U.S. military aid and U.S. arms transfers to Israel until the Israeli government puts effective mechanisms in place to guarantee that these transfers will not be used to commit or facilitate violations of international humanitarian and human rights law. Israel must also put in place credible accountability processes for past violations.

We also urge the U.S. government to help ensure that a comprehensive U.N. Security Council arms embargo is imposed on all parties to the current conflict (Israel, Hamas and other Palestinian armed groups).

See also, ‘The U.S. is Not Just a Bystander in Israel-Gaza Violence.’

2 thoughts on “Which Weapons Policy for Israel Are You Using Mr. President?”