Many of these posters, which I also saw hanging in other cities across the West Bank, are sponsored by the Palestinian Authority institutions. In Ramallah, the local municipality also recently hosted a demonstration where people carried dozens of empty coffins wrapped in Palestinian flags to represent the rising numbers of people killed in Gaza since the launch of Israel’s military operation there on July 8. The procession was led by the local governor and other officials.

In contrast with the past seven years or so, West Bank solidarity with Gaza seems to be stronger. During the 2008/09 and 2012 Israeli military operations in Gaza, a solidarity demonstration would gather maybe a couple of dozen or fewer people in a handful of locations. Today, hundreds are protesting on an almost daily basis in cities and villages across the West Bank.

On July 24 the West Bank saw its largest single demonstration in years, when thousands marched from Ramallah towards Jerusalem to protest against the Israeli attacks on Gaza. The demonstration was quickly met with excessive force by Israeli forces when it reached Qalandia military checkpoint. At least one demonstrator was killed and many others were severely injured by live gunfire ammunition. 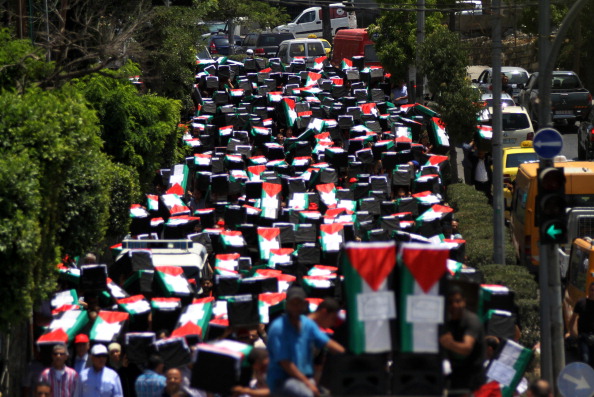 The next day there were protests and clashes in dozens of locations across the West Bank.

Five more people, including a child, were killed by Israeli forces. Among them was Hashem Abu Maria, 47, a human rights defender who worked for Defence for Children International – Palestine. An Israeli soldier shot him in the chest with live gunfire ammunition during a demonstration in the village of Beit Ummar on July 25.

A group of Palestinian activists have been producing daily maps that show locations where demonstrations and protests have taken place since the beginning of July. A quick scan through them quickly reveals how strongly West Bank residents have reacted to the latest Israeli military operation in Gaza.

But while this reaction may have been empowered by recent efforts to reconcile rival Palestinian parties, it is far from being a result of Palestinian Authority policies and practices.

The protest movement here has been slowly growing for years, and has remained steadfast in the face of brutal Israeli repression. At least 10,000 Palestinian protesters marching against Israel’s military offensive in the Gaza Strip clash with Israeli soldiers and border police at the Israeli Qalandia checkpoint, between Jerusalem and Ramallah. Israeli security forces shot dead a Palestinian man and wounded 150 other people during the massive protest in the West Bank in support of fellow Palestinians in the Gaza Strip. (Photo Credit: ABBAS MOMANI/AFP/Getty Images)

It has also been undeterred by the Palestinian Authority’s attacks on freedom of expression and assembly. Even with the official show of solidarity with Gaza, the Palestinian Authority security forces have thwarted demonstrations – sometimes using excessive force – in areas under their control, especially those marching towards Israeli checkpoints, military structures, or settlements.

The protest movement comes after years of different groups and communities demonstrating against the Israeli military occupation and the expansion of unlawful settlements in the West Bank, including East Jerusalem. It is today moved by rage that has grown from decades of living under that occupation.

Days before Israel leveled whole neighborhoods in Gaza, the homes of three men suspected of carrying out attacks against Israelis in the West Bank were blown up, rendering them completely uninhabitable.

When I visited one of the homes in Hebron that had been destroyed, a relative told me: “I am ashamed to speak of my terror or the demolition of my home when I see how Israel is bombing entire families while they are still inside their houses in Gaza. I am not worried that my home is demolished, I am worried about my people in Gaza.”

The worries, the pain, and the anger of the Palestinians in the West Bank and those in Gaza are the same. The family in Hebron is a victim of collective punishment, a violation of international law. Collective punishment is also what thousands of families in Gaza have suffered during seven years of Israel’s unlawful closure and blockade of the territory.

People in the West Bank have long declared that 'we are all Gaza,' an affirmation that the pain, suffering and loss due to decades of Israeli military occupation are shared by Palestinians in the West Bank and Gaza alike.

People in the West Bank have long declared that “we are all Gaza,” an affirmation that the pain, suffering and loss due to decades of Israeli military occupation are shared by Palestinians in the West Bank and Gaza alike.

They suffer violations of human rights and international humanitarian law on a daily basis and in different shapes and forms – from home demolitions, illegal settlements, and unlawful killings to the bombardment of civilian homes and infrastructure and the crippling siege on Gaza.

The time has come for the international community to act on all these issues. A special responsibility lies with the USA and the European Union, who have influence over Israel. They must act immediately to suspend all arms transfers to Israel and support an arms embargo on all weapons going to all sides in the conflict to make clear that they will not facilitate unlawful killing of civilians and other serious violations.

Equally important, they must take concrete steps to end Israel’s military blockade of Gaza and ensure accountability and respect for international law is a top priority for all sides. The Palestinian Authority should also do its part to ensure accountability for serious violations by acceding to the Rome Statute and therefore joining the International Criminal Court.