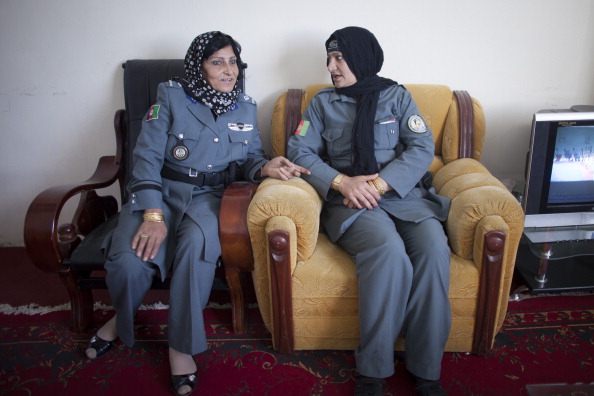 Lieutenant Islam Bibi Helmand’s top female police officer (R) talking to a colleague on March 8, 2013. Known as the most senior female police officer in Afghanistan’s Helmand province, Bibi was shot dead on July 4, 2013 by unknown gunmen while being driven to work. The attack is seen as part of a series violence against top women officials (Photo Credit: Majid Saeedi/Getty Images).

The situation is unfortunately not unfamiliar yet it deteriorates with each passing day: Afghan women working to protect and advance their rights continue to face growing threats to their lives and safety.

Well-documented threats to female Members of Parliament and government, women’s human rights defenders, and female police officers occur on a daily basis, all set against the terrifying backdrop of an uncertain future currently being shaped by attempts to revoke provisions of the country’s Elimination of Violence Against Women law and potential peace negotiations with the Taliban and other insurgent groups that threaten to rollback gains for women’s human rights.

Many of the threats Afghan women face turn into violent acts, many have resulted in murder.

Two representatives of the Ministry of Women’s Affairs have been killed in Afghanistan in the last year. In September 2013, Indian author Sushmita Banerjee, who wrote about life under Taliban rule, had just returned to Afghanistan and was murdered outside her home.

Many of the threats Afghan women face turn into violent acts, many have resulted in murder.

Targeted violence is not only occurring against high-profile Afghan women, it is happening at shocking rates to women and girls all over Afghanistan.

It is happening on the streets: in Badghis province, a young woman and mother of two children named Halima was accused of running away with a male cousin. The result of this accusation? Halima was shot dead by her father in April in front of a public crowd of several hundred people.

It is happening in homes behind closed doors: Sitara, 30, a native of Herat Province was recently attacked by her husband of 12 years for refusing to give him money to buy drugs. He cut off her nose and her lips.

It is the work of these courageous women and the deplorable violation of their human right to live lives free from violence that compels us to act.

Inspired by and working in collaboration with our brave Afghan women partners on the ground, last year Amnesty International worked with Senators Bob Casey (D-PA) and Kay Bailey Hutchison (R-TX) to prioritize the security needs of Afghan women and girls through the Afghan Women and Girls Security Promotion Act of 2012.

Thanks to pressure from Amnesty International activists and other groups supporting the bill, it was included in the annual National Defense Authorization Act (NDAA) and became law in December 2012, requiring the Department of Defense to report on its efforts to promote the security of Afghan women and girls during and after the transfer of security responsibility to Afghan forces.

The reports of women’s human rights abuses, whether coming from the Department of Defense or the daily news, are grim. So we haven’t stopped there.

Over the past year, Amnesty has worked again with Senator Bob Casey, bringing the voices of Afghan women to Washington, D.C. and filling a new piece of legislation with their words. Once again using the NDAA, Senator Casey and Kelly Ayotte (R-NH) introduced an amendment to the bill that would require the Department of Defense to support the security of Afghan women and girls during and after the security transition process.

We are excited to report that the final NDAA includes key elements of the Casey-Ayotte amendment and following its passage in the House of Representatives last week, it has cleared the Senate and is on its way to President Obama for signature.

And speaking directly to the fears of an uncertain future for Afghan women, the Casey-Ayotte amendment states that any political settlement or peace negotiation with insurgent groups must include a renouncement of violence and acceptance of the Afghan constitution, including its protections for women and minorities.

Women’s and girls’ security is a fundamental human right that must be upheld and one that is essential to the future stability and prosperity of Afghanistan. Congress has recognized that the U.S. has the opportunity and the obligation to take immediate steps to ensure there is no backsliding of human rights gains made by women and girls in Afghanistan.

Please continue to demand that the U.S. support the rights of Afghan women and girls by taking action here; the inclusion of this language for Afghan women in the NDAA only adds a brick to the foundation of women’s full participation in all aspects of Afghan life, much more remains to be done.