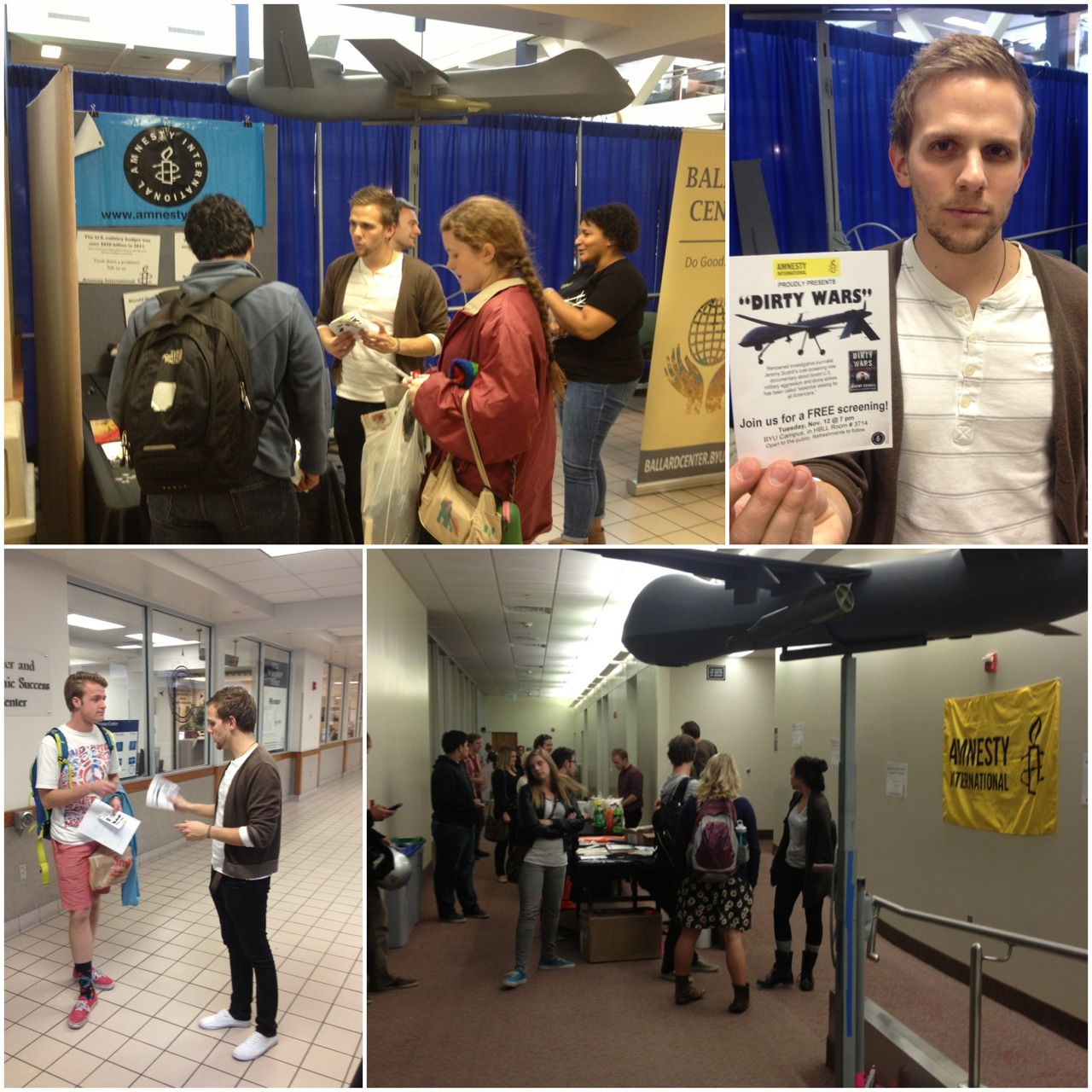 As we unpacked the model drone for our last action, it was hard to ignore the biting chill in the mountain air in Salt Lake City. While we were preoccupied with the tour, winter had come. We’d pushed on as the days grew shorter and nights grew colder. We pushed on, feeling the presence and power of the thousands now standing with us around the country, and knowing that 9-year-old Nabeela Bibi’s call for justice for her grandmother, Mamana, must not be ignored.

I looked out at the student leaders from BYU getting ready for the die-in. A few assembled the drone, others handed out t-shirts and signs. Seeing them prepare, I felt that familiar surge of energy that first arrived when I was a child watching my friends and family rise up against the Marcos dictatorship in the Philippines. I picked up my megaphone for the last time, closed the back door of the car, and marched over to raise the call again to end the #GameOfDrones.

Thousands decided that they were no longer willing to stand idle as people are killed in our names behind a shadowy global war theory.

”
What had originally started as a catchy phrase that grew out of a mild obsession with an HBO show has now become a rallying cry against the secrecy of the U.S. drone program. Over 7 weeks as we toured the country, thousands decided that they were no longer willing to stand idle as people are killed in our names behind a shadowy “global war theory.” Nearly 200,000 people followed the tour online, hundreds of students affirmed their commitment to human rights by joining Amnesty, and groups grew on every campus where we stopped.

As I write these words, our rallying cry is echoing throughout the country and around the world. Students have rallied in Seattle, tabled in New Orleans, and wrote letters in Charlottesville. Our movement is growing, as people plan events across the U.S, and as tens of thousands sign petitions around the world. Together, we are an unstoppable force. United, we will make a difference.

People join Amnesty for many reasons, and I saw this firsthand on the tour. Flor joined because she believes in doing whatever it takes in the struggle for human rights, and the more she learned about the secrecy of the U.S. drone program, the harder she worked. Tenzin, a young Tibetan student who devoted a week to outreach in Minnesota, joined us because he believes in the power of solidarity. Sahare recommitted in honor of her grandmother, who fell ill while we were on the tour and was on her deathbed far away from her homeland, Pakistan. 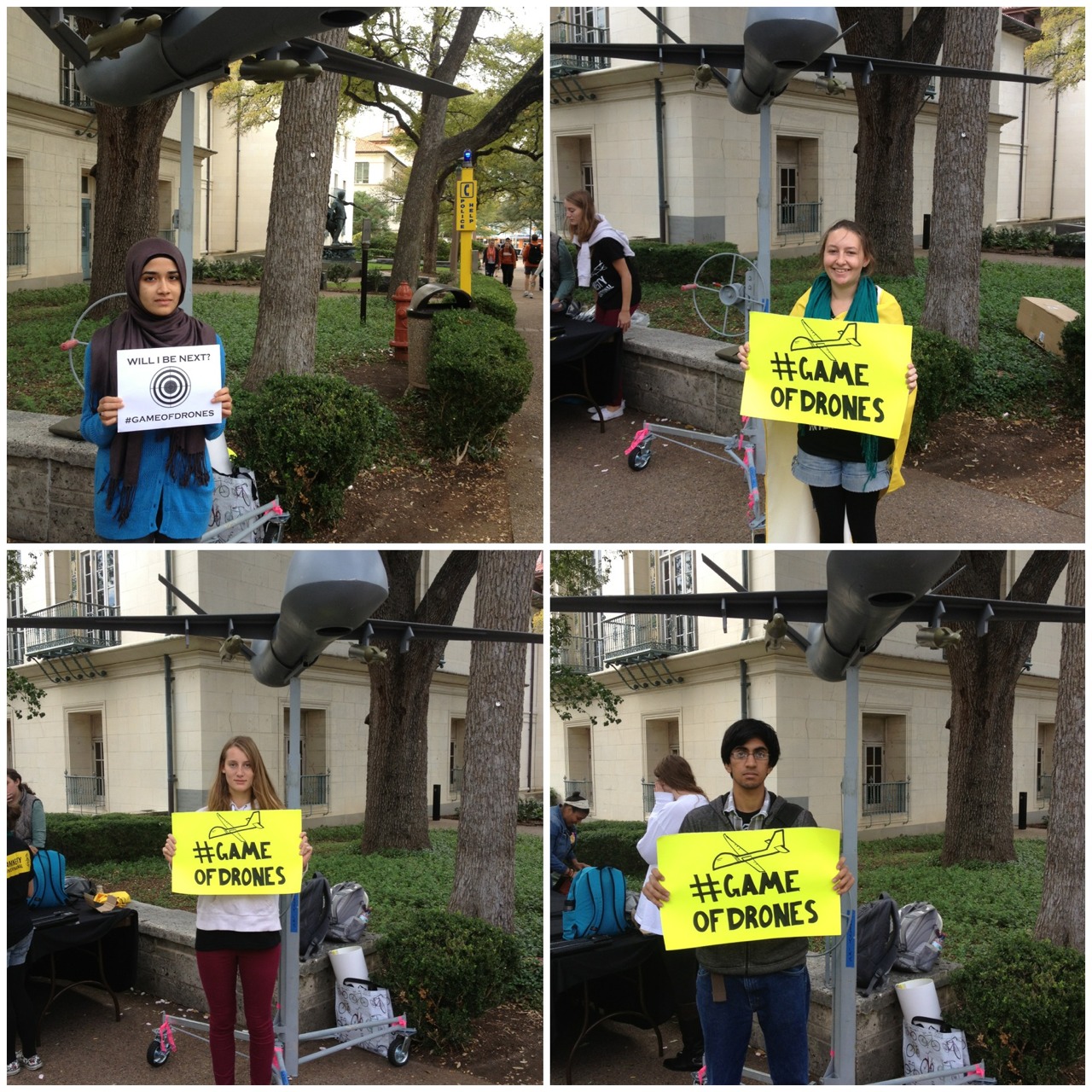 The #GameOfDrones tour was, and is, all of these people and more. We are the youth leaders in Texas spending every second they are not in class doing outreach on their campus. We are the young woman who said after a die-in, “For the first time, I feel like my actions can make a difference.” We are the students at the University of Cincinnati who stood up one by one, fists raised in the air, tears streaming down their faces as they affirmed their commitment to this fight.

Right now, we have work to do. When President Obama spoke at the National Defense University in May, he called civilian casualties “heartbreaking tragedies” that will “haunt us as long as we live.”

But months later, those words continue to haunt us, and rather than seeing action that President Obama promised that “respects the inherent dignity of every human life,” we’ve heard nothing but silence, even as Nabeela Bibi traveled over 7,000 miles to tell the story of watching her grandmother blown to pieces to a nearly empty Congressional briefing room.

Now more than ever, we need to amplify her voice. We cannot sit idle as Nabeela wonders for even one more day if she will be the next target of a Hellfire missile from a U.S. drone. We have to grow big enough and loud enough that neither President Obama nor Congress can ignore human rights any longer. And Amnesty’s youth members are doing just that.

They are leaders. Because of them, we are growing stronger every day, and because of them, we will win. Though the tour is over, I hope you will continue the fight for human rights by joining Amnesty’s annual Write for Rights, or by becoming an Amnesty USA member. The fight continues!