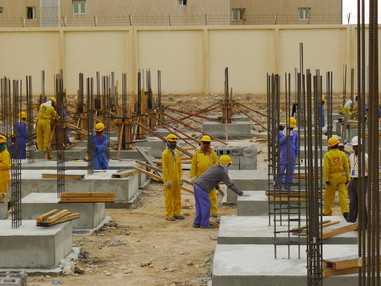 This is how Rahul summed up his first stint as a migrant worker in Qatar when he recently spoke to Amnesty International.

Stuck thousands of miles from his native India in a land where he couldn’t speak the language, he faced the worst predicament of his working life.

A Gleaming Site with a Dark Back Story

About a 50 minute drive north of Doha, at the heart of Qatar’s gas industry, lies the Ras Laffan Emergency and Safety College (RLESC) campus. The training facilities include a 120-seat auditorium, conference rooms, a 300-seat dining hall, and a parade ground with VIP stand.

But the shiny new campus obscures a tale of misery. For Rahul and his co-workers at a company called Krantz Engineering, the time they spent helping to build the college, and the months immediately afterwards, was a dark period in their lives.

In July 2012, the men’s pay suddenly stopped. Their employer repeatedly assured them that the salaries were coming, and that they should still keep working, but the pay never arrived. They faced stiff financial penalties if they did not come to work, even though they were not being paid.

By November 2012, most of the men had stopped working and asked to go home with the salaries they deserved. But at the beginning of 2013, they found themselves still stranded in Qatar, without work or pay for months on end, with no way to get home, struggling for food and at constant risk of arrest. Their predicament relentlessly deteriorated, but despite numerous pleas to their employer and the Qatari authorities to let them go home with their salaries, no help was in sight.

By February 2013, after seven months without pay and unable to go home, several men said they were having suicidal thoughts.

The Krantz Engineering employees wanted to change jobs or leave Qatar – the repeated promises that they would eventually receive their back-pay had long since worn thin. As the months slipped by, some of the workers even asked their company to be sent home without pay.

But there were bureaucratic as well as practical hurdles that made escaping this situation far more difficult than it might seem.

Because of Qatar’s ‘sponsorship’ system, which regulates the way migrant workers are recruited and employed, the workers’ continued presence there was tied to their employer – meaning they could not just seek another job in Qatar.

”
At the same time, Krantz Engineering was withholding their passports, so even if they could muster the airfare to get home by themselves, they could not simply catch the next flight out of Doha.

There was also a practical consideration that weighed heavily on the minds of many of the workers.

As Rahul explained, most, if not all, had been lured to work for Krantz because the promised wages were so much higher than what they could expect back home. In the process of moving to Qatar, many had accrued debts that they now had to pay off – above and beyond the costs of obtaining an exit permit from the Qatari authorities and paying for a flight back home.

Flights home and other bureaucratic costs are supposed to be covered according to the contracts signed by migrant workers in Qatar. But just like the promised wages, those pledges often fall flat.

All of this conspired to mean that Rahul and his colleagues were forced to languish in their accommodation, without pay for months on end. After April 2013, food deliveries from the company stopped. During all this time, most of the men lacked formal residency status in Qatar, because Krantz had not arranged for them to be issued. Several were arrested as a result.

“It has been horrible,” said one of Rahul’s colleagues,  a 31-year-old Indian heating and ventilation supervisor. “I don’t know why I came here. I consider this to be the worst phase of my life. My father passed away while I was struggling here; I couldn’t leave to see him for the last time even after begging [the Ministry of Interior], crying and falling at their feet.” After multiple visits to demand action from various Qatari courts and state institutions, Rahul vented his frustration to Amnesty International in April 2013:

“I am writing this email after lots of pain and struggle…I have complained in several places like [the] Labor Court, Indian Embassy, High Court, CID [Ministry of Interior] and National Human Rights Council but [have not received a] positive response from anyone…I don’t have money to eat food [for the] last 5 days as I didn’t get [paid for the] last nine months.”

Rahul was finally able to obtain an exit permit after Amnesty International put him in touch with Qatar’s National Human Rights Committee, who in turn worked with the Ministry of Interior to speed up the process. He was finally able to leave in May this year, but only after Krantz Engineering coerced him into signing a letter saying he had been paid nine months of outstanding wages. He has yet to receive a penny of what he is owed.

The last three desperate former Krantz Engineering workers finally flew home from Qatar in July 2013, a year after their pay was stopped.

But, for Rahul and many of the workers, the exploitation they faced is still taking its toll. In order to pay off the debts he accrued while working for Krantz, Rahul had no choice but to return to Qatar – this time with a different employer – where he is still trying to earn back some of the money he lost.

The Dark Side of Migration

The case of the Krantz Engineering workers is just one of many disturbing examples highlighted in a new report by Amnesty International, The Dark Side of Migration: Spotlight on Qatar’s construction sector ahead of the World Cup. The report finds Qatar’s construction sector rife with abuse, with workers employed on multi-million dollar projects frequently suffering serious exploitation.

“Behind the often complex contractual chains linked to employment in Qatar lie the widespread and routine abuse of migrant workers – in some cases amounting to forced labor,” said James Lynch, researcher on Gulf Migrants’ Rights at Amnesty International.

Amnesty International’s findings have highlighted the inadequacy of the Qatari government’s existing arrangements to protect migrant workers. We urge the Qatari government to enforce existing labor protections – which many employers flout routinely. There should also be an overhaul of the ‘sponsorship’ system, which leaves migrant workers unable to leave the country or change jobs without their employers’ permission.