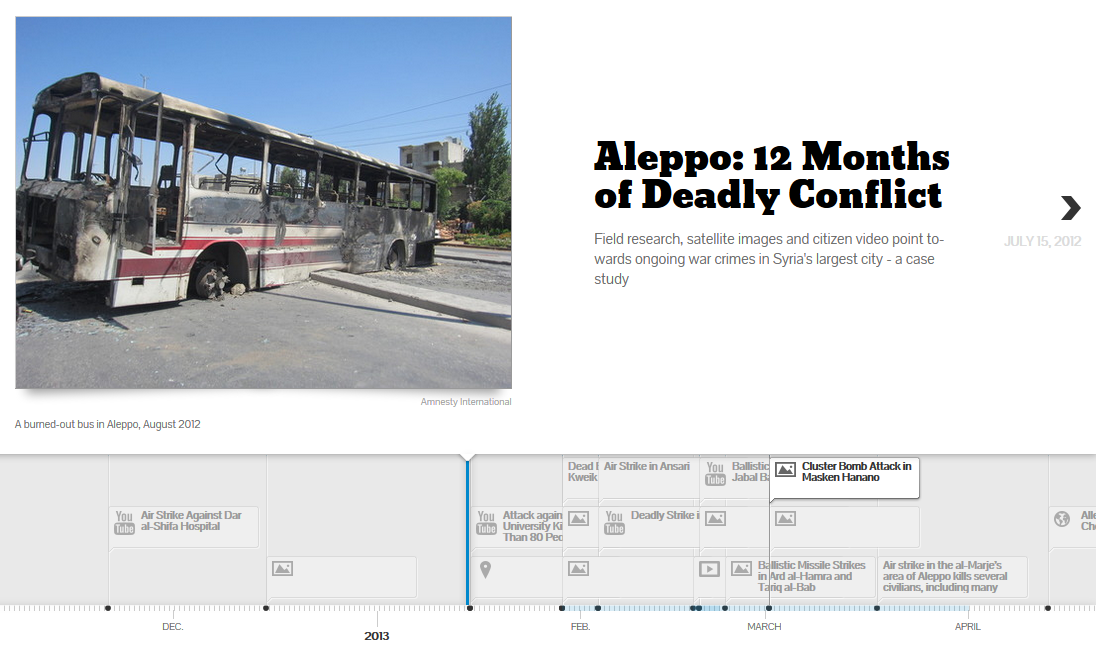 12 Months of Deadly Conflict in Alepp. Explore the interactive timeline that include satellite images, citizen video and field research.

In one of the most comprehensive satellite image analysis of an active conflict zone ever conducted by a non-governmental actor, the American Association for the Advancement of Science (AAAS) today released a detailed damage assessment of Aleppo, Syria’s largest city. The impressive survey is a follow up to a September 2012 analysis by AAAS that showed the first impacts of the armed conflict on the densely populated area of Aleppo, and comes exactly a year after Amnesty International issued an urgent warning about the increased risk to civilians in the city.

By documenting the vast damage to Aleppo’s infrastructure since that warning, the newly released analysis by AAAS – pursued in collaboration with the Science for Human Rights program of Amnesty International – leaves little question as to a significant cause for the staggering displacement of half of the city’s population: a campaign of indiscriminate air bombardment by government forces, which have also reduced entire areas to rubble and killed and maimed countless civilians.

The analysis found hundreds of damaged or destroyed buildings over the study period, and tracked the increased proliferation of roadblocks, with over a thousand visible in imagery from late May 2013.

AAAS is providing an additional resource that I’d like to bring to readers attention, especially to those working on Aleppo. A Google Earth layer to be released later today includes all the images used in the analysis, meaning researchers or journalists have now access to updated imagery as current as late May 2013.

Why is this relevant? Due to the heavy fighting, Aleppo’s urban landscape is starting to change, meaning satellite imagery on Google Earth (currently from October 2011) does not necessarily reflect the most accurate lay of the land any longer. Satellite imagery provided by Google or other mapping platforms are a highly useful tool to validate citizen video coming out of the conflict zone, to name just one example.

With the increased importance of citizen video in human rights fact-finding and news reporting, having access to current imagery – for confirming the exact location of potential video evidence – can help a lot with assessing potential human rights evidence in a timely way.

The most visible sign of the conflict’s impact as seen in satellite imagery are comparative images of neighborhoods devastated by three ballistic missile strikes launched by Syrian government forces between February 18 and 22, 2013, which provide alarming evidence of the human toll of escalating tactics deployed by parties to the conflict.

These three strikes alone killed more than 160 residents and injured hundreds, in addition to destroying scores of homes, leaving hundreds homeless. Hussein al-Saghir, a 15-year-old boy told our field researcher about his 16 relatives killed in the ballistic missile strike in the Jabal Badro district of Aleppo on February 18.

All my extended family lived here, we had 10 houses. My mother was badly injured and is now in hospital in Turkey. She does not know that her sons are dead. My uncle, Mohamed Ali, lost 27 members of his family. He has lost his mind; he doesn’t know anything anymore. He is in the countryside; everyone who survived has gone to stay with relatives or friends somewhere. Here, there is only rubble left.

The Consequences of International Paralysis

The combination of field research, testimony, satellite images and citizen video paint a grim picture of Aleppo and clearly suggest ongoing war crimes. The international paralysis over Syria contributes directly to the lacking response to the humanitarian crisis borne from these crimes. The U.N. Security Council to date has failed to refer the situation in Syria to the International Criminal Court to investigate violations by all parties to the conflict. And at a donor’s conference at the beginning of the year, donors pledged $1.5 billion in aid – only half of which has been secured so far.

Fighting across Syria rages on and the crimes in Aleppo are emblematic of the war crimes and crimes against humanity committed across the country. Having that in mind, the paralysis of the UN Security Council in effectively condemning such crimes is not only inexcusable, but enabling of the human suffering that dominates the status quo.