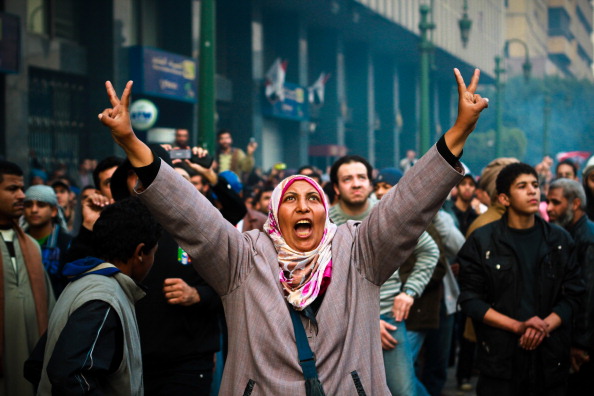 Blame is placed on the victims for being dressed “indecently,” or for daring to be present in “male” public spaces.

The horrific testimonies emerging following protests commemorating the second anniversary of the “25 January Revolution” have brought to light how violent mob sexual attacks against women have happened, but have rarely been brought to public attention.

Operation Anti-Sexual Harassment/Assault (OpAntiSH) is an initiative by a number of Egyptian human rights organizations and individuals set up to combat sexual harassment of women in the vicinity of Tahrir Square. It received reports of 19 cases of violent attacks against women on 25 January 2013.

Activists leading the group “I saw Harassment” told Amnesty International that they managed to intervene in a further five cases before violence escalated. Four women were assaulted inside the Sadat Metro Station and one behind the Omar Maqram Mosque.

Testimonies from victims and those attempting to save them paint a frightening picture: tens if not hundreds of men surrounding the victims with countless hands tearing-off clothes and veils, unzipping trousers and groping breasts, nipples and backsides.

In some cases these attacks meet the definition of rape, including penetration with fingers and sharp objects. Frequently, fights with knives, metal rods and sticks breakout amid scenes of chaos, where the lines between those trying to help and those participating in the violent attack become blurred.

Activists coordinating rescue efforts are often exposed to physical and sexual assaults. One from the “I saw Harassment” initiative told Amnesty International that upon receiving a report of an alleged ongoing attack, she rushed to the scene with another female activist.

She describes what happened: “I ran inside the circle of men to try to save her; the men let me through. Once I was in the middle of the circle, I realized that the person being attacked was my colleague and that the reported attack was a ruse to get us to the scene to intimidate and assault us… Suddenly hands were on my breasts, inside my bra, and squeezing my nipples… I was trying to defend myself and heard my colleague screaming. Her chest was bare and they cut her bra down the middle… In the middle of this, they were insulting us and calling us whores who were asking for this by squeezing ourselves in the middle of men… At some point I could feel 15 hands on me… Someone grabbed me by my clothes and was dragging me on the ground… Another guy put his hand down my trousers.”

The incident took place in Tahrir Square at about 8:30 pm on 23 November 2012, during protests against President’s Mohamed Morsi’s Constitutional Declaration.

Fortunately, other protesters managed to get the two to safety in a nearby field hospital. They brought one of the attackers they had caught to a police station and eventually the Qasr al-Nil Public Prosecution office.

The woman activist recounted that police officers and the prosecutor handling the case pressured her to drop her complaint, and only reluctantly agreed to file a report when she insisted with the help of her lawyers.

This type of response is typical and reflects a culture of denial, inaction and in some cases complicity by law enforcement officials who not only fail to protect women from sexual harassment and assaults, but also fail to properly investigate allegations and bring perpetrators to justice. As perpetrators get off scot-free,  violent attacks continue as seen on 25 January 2013.

One survivor of a violent assault on 25 January in Tahrir Square, a volunteer with OpAntiSH, broke the wall of silence and shame surrounding such attacks publishing her testimony on Facebook.

Her heart-wrenching account was very similar to the one above.

As she and a female friend rushed to intervene in a reported sexual assault on a woman, they were attacked.

She described numerous hands ripping her clothes, touching her all over her body including her breasts and backside, and reaching inside her trousers. They eventually managed to escape into a restaurant.

What is particularly shocking is that these mob sexual assaults are happening in public spaces, sometimes in broad daylight, with thousands of onlookers who do either do nothing, feel helpless, or try to help – exposing themselves to violence.

I was in the vicinity of Tahrir Square between 6 pm and 10 pm on 25 January, the time when most of these attacks were happening.

It was a surreal landscape, moving between the strange normality of people drinking tea and joking in cafes around the Square and the field hospital shrouded in a cloud of teargas near the site of violent confrontations behind Omar Maqram Mosque.

One protester called warning me not to approach Talaat Harb Street as he had just witnessed two women being surrounded by a vicious mob. I asked some of the doctors in the Square if they received cases of survivors of sexual assaults. They denied it, such cases claiming the reports were exaggerated.

Now the tear gas has dissipated and the brave women have spoken out, it is clear that they were wrong.

Activists involved in addressing the phenomenon provide various explanations for its occurrence: a culture of impunity when it comes to violence against women; opportunism by criminal elements in the current climate of political instability; systematic attempts to exclude women from public spaces and deny them their right to participate in the events shaping Egypt’s future and the lack of interest of political movements, officials and in the media.

The authorities announced a new sexual-harassment law in October, but never implemented it. It does not seem to have been a priority for the authorities. Instead, a new constitution passed in December refers to women’s role as homemakers, and does not explicitly ban discrimination against them.

Despite the violence, Egyptian women resiliently continue in their participation in protests.

Regardless of the reasons, it is high time for the Egyptian authorities address sexual harassment and violence against women as well as the chronic and systematic discrimination women in Egypt face every single day of their lives.

23 thoughts on “Sexual Attacks on Women in Egypt”