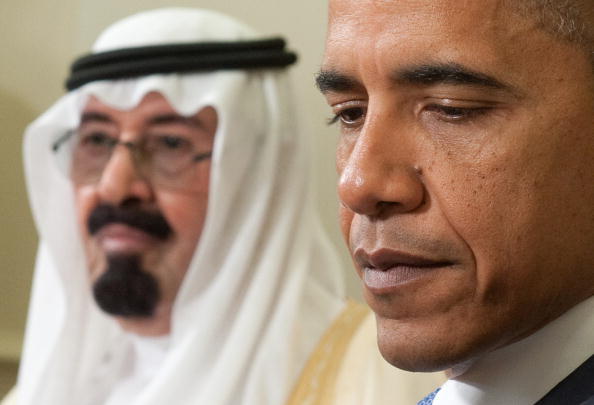 Want to read the full letter?  Scroll down, or download the PDF.

On the eve of your visit to Saudi Arabia, I write to urge you to advocate for significant human rights reforms in your meetings with King Abdullah bin Abdul Aziz Al Saud and other Saudi Arabian officials. I also urge you to take important public steps to show your support for those in Saudi Arabia who face repression as they stand up for their human rights.

The government of Saudi Arabia is extraordinarily repressive. Saudi Arabia is the only country in the world that forbids women to drive a car, and Saudi Arabian women continue to face many other forms of severe discrimination in both law and practice. In 2013, all founding members of the country’s four independent and unlicensed human rights organizations were either sentenced and imprisoned, or are currently undergoing trials, many in a specialized “terrorism” court. Two examples are Mohammad al-Qahtani and Abdullah al-Hamid, founders of a local human rights organization. They have been imprisoned based on their peaceful criticism of the government.

For too long, the U.S. has put geopolitics and access to energy over support for human rights in its relationship with Saudi Arabia. As an ally of the United States, Saudi Arabia has been spared the blunt criticisms that U.S. officials make of other governments that commit serious human rights violations. Your upcoming visit is an opportunity to end this discrepancy.

These steps will demonstrate that the U.S. government is serious about prioritizing human rights in its relationship.

Saudi Arabian officials also discriminate against foreigners and minorities, such as migrant workers and minority religious groups. These include the country’s Shi’a Muslim community, who are banned from practicing their religious beliefs and rituals in public.

In Saudi Arabia, torture and other ill-treatment during detention and interrogation are common and carried out with impunity. The heavy reliance by the courts on “confessions” often extracted under torture, duress, or deception has entrenched such abuses. Corporal punishment is also used extensively. Flogging is mandatory for a number of offenses and can also be imposed at the discretion of judges. Sentences can range from dozens to tens of thousands of lashes. Punishment by amputation is also enforced for certain offenses.

In addition to the driving ban, Saudi Arabian women continue to face severe discrimination in law and practice.  They are also inadequately protected against domestic and other gender-based violence. Discriminatory rules relating to marriage and divorce, which are not codified, cause some women to be trapped in violent or otherwise abusive relationships. The guardianship system that prevails in Saudi Arabia means women are required to obtain the permission of a male guardian before getting married, traveling, undergoing certain surgical interventions, undertaking paid employment or enrolling in higher education. As a consequence of these realities, many women find it difficult to obtain work, despite an increase in the number of women receiving higher education.

Your personal support for human rights in Saudi Arabia is vital. To the extent that U.S. officials have privately lobbied Saudi Arabian officials on such matters in the past, they have failed to convince the Saudi government to make any substantive changes. Indeed, for many Saudi Arabian advocates for human rights, life has become much worse. They are sitting in prison cells simply for peacefully advocating for their human rights. Such are the grim realities in Saudi Arabia today, and Amnesty International urges you to publicly address these facts when you visit the country.

6 thoughts on “Read the Letter: What We Want President Obama to Do in Saudi Arabia”