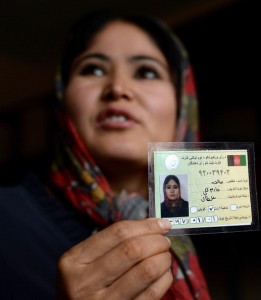 When did it become cliché to say that you want “world peace”? Probably for as long as anyone can remember.

But why should this be such a farfetched and unattainable objective? Perhaps we don’t believe peace will ever be sustainable because half of all peace agreements around the world fail within the first five years? Or perhaps because the way governments approach peace processes hasn’t changed despite such an abysmal record of success?

Perhaps it’s time to try something new. Something that can change this record and help build lasting and sustainable peace. Yesterday, several Members of the U.S. Congress agreed and laid down a marker for change.

Through the reintroduction of the Women, Peace and Security Act (WPS) of 2013 (H.R 2874), Members of Congress said loud and clear that the essential yet overwhelmingly absent component to both lasting peace and the prevention of recurring conflict is the inclusion of women.

It is a truth slowly but surely becoming universally acknowledged that engaging women as agents of peace and security increases the likelihood of successful conflict resolution and the creation of sustainable peace. Women are powerful peace-builders whose efforts to prevent conflict and secure peace are critical, yet they remain largely under-utilized as they are excluded time and time again from peace processes around the world.

Women are powerful peace-builders whose efforts to prevent conflict and secure peace are critical, yet they remain largely under-utilized as they are excluded time and time again from peace processes around the world.

”
Thanks to the leadership of Representatives Jan Schakowsky (D-IL), Eddie Bernice Johnson (D-TX), Mike Honda (D-CA) and Niki Tsongas (D-MA), the WPS Act recognizes the untapped potential and incredible value that women bring to the peacemaking table by requiring the U.S. to promote the meaningful inclusion and participation of women in all peace processes that seek to prevent, alleviate, or resolve violent conflict.

The legislation would codify into law the U.S. National Action Plan on Women, Peace, and Security, which acknowledges the unique and disproportionate effect armed conflict has upon women and calls for their participation at all levels of decision-making on conflict resolution and peace-building as directed by U.N. Security Council Resolution 1325.

The WPS Act will mandate the inclusion of women’s voices in shaping a more peaceful future and help end the cycle of women’s exclusion that has been undeniably detrimental to women’s ability to access the full spectrum of their human rights.

The effects of this exclusion from conflict resolution and peace-building could not be demonstrated more clearly than in the case of Afghanistan. More than a decade following Taliban control, Afghan women have made modest advances for their rights in education, maternal health, political participation, mobility and employment.

Yet these gains are being compromised as violent attacks against women are reportedly on the increase, while simultaneously members of the Afghan Parliament opposed to women’s rights have sought to weaken and repeal the Elimination of Violence Against Women Law. As women are increasingly becoming targets of discrimination for engaging in public life, the Afghan Parliament passed a revised Electoral Law earlier this month that reduces an existing guarantee for women in Afghanistan’s provincial councils from 25 percent of seats to 20 percent. 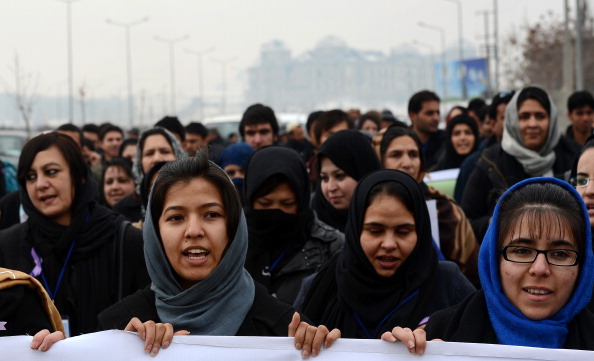 Afghan women march during a protest calling for an end to violence against women in Afghanistan and around the world. According to a U.N. report, Afghanistan has made progress in protecting women against violence, but many still suffer horrific abuse 11 years after a U.S.-led invasion brought down the Taliban regime (Photo Credit: Shah Marai/AFP/Getty Images).

Anticipated reconciliation talks between the Taliban and Afghan government could also potentially jeopardize the gains in women’s rights if women are not given a seat at the negotiating table and treated as equal partners in shaping the country’s path moving forward.

Afghan women must be given a seat at the table!

Afghan women must be able to participate in the design and implementation of the reconciliation and peace process. The participation of Afghan women in shaping their country’s future and engaging as equal partners will help improve and secure their political status, security, economic and social well-being, and uphold their human rights.

Afghan women are one of the most powerful forces in Afghanistan for ensuring the country’s lasting peace and respect for human rights. So are women in Egypt. And in the Democratic Republic of the Congo.

All over the world, we can take a giant step closer to achieving lasting peace by empowering women and recognizing them as major contributors to preventing conflict and securing human rights. If you think it’s time for women to pull up a chair at the peace-making table, tell your Member of Congress to cosponsor the Women, Peace and Security Act today!

2 thoughts on “Pull Up a Chair! Tell Congress You Want Women at the Peacemaking Table”