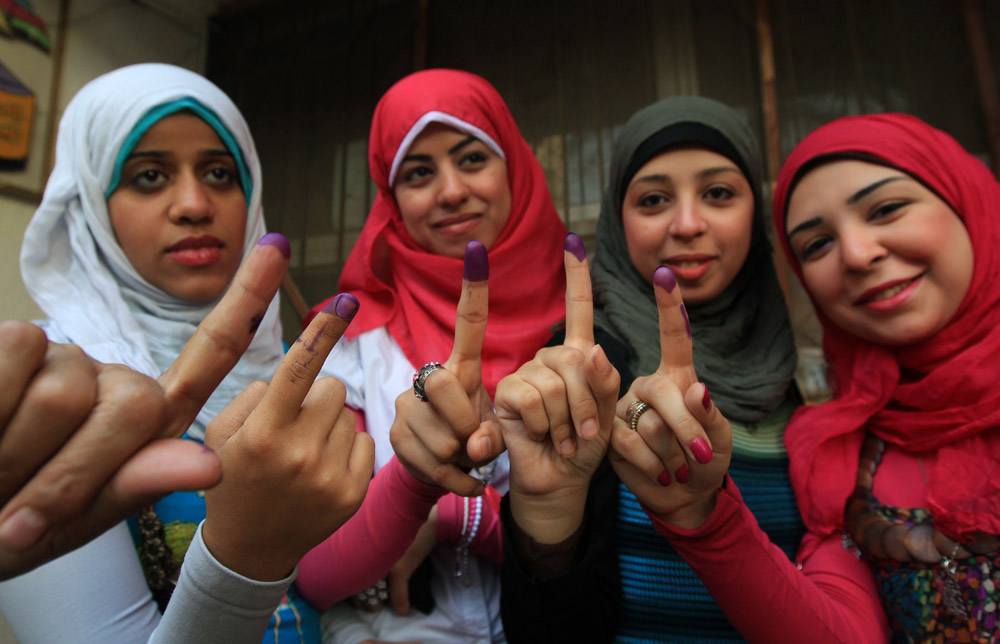 Nehal Amer, Amnesty International Middle East Country Specialist, was in Cairo for the elections and captured the celebratory atmosphere in Nazr City.  She noted “a bit of disorganization” but people remained upbeat.

Amer said she couldn’t help but notice one other thing: The greater number of “women in the voting lines compared to men.”  That’s significant for several reasons: After playing a leading role in the uprising, Egyptian women have been marginalized by a number of decisions by the ruling elite and by attacks on women protesters by military and security.  Their turnout indicates that Egyptian women will not quietly return to their homes in the New Egypt.

But it also suggests that the relationship between Egyptian women, the Muslim Brotherhood and other Islamist parties is more complicated than most reports in Western media indicates.  It is expected that the Muslim Brother candidate will make the two-candidate run-off set for June.  The news is generally reported as offering a setback for women’s rights in Egypt, but a close reading of the voting total may indicate that the group has significant support from women voters.

On the other hand, the Muslim Brother candidate appeared to win only about 25 percent of the national vote, while a more secular surprise second candidate looks more likely to pick up support from other candidates backers in the run-off election.

Regardless of the outcome, it will be one freely chosen by the Egyptian people, one of the most significant accomplishments of the Jan. 25 uprising.  What human rights activists should take away from this is that the spirit of the Egyptian people to claim their rights remains undiminished, despite the many setbacks and broken promises of the past year.

Obstacles remain: The transfer of power of the military to the new civilian leadership remains suspect, and having gotten a taste of using Egypt’s Emergency Laws to silence critics, the military may not stop.  Just this month Asmaa Mahfouz, the young Egyptian woman who helped launch the Jan. 25 uprising, was sentenced to a year in jail for assaulting a man she says she never met.  Mahfouz, who at Amnesty International USA’s Annual General Meeting described the efforts of the military to silence her criticisms, says the charges were politically motivated and that her accuser has a history of leveling criminal charges against other military critics.

Then there’s the case of Mahmoud Mohamed Amin, a young Egyptian who was detained after taking part in a May 4 protest and is being denied medical care for injuries he received after being shot in the face with shotgun pellets during the 2011 uprising.  Both of these cases represent a return to the old discredited practices of the Mubarak regime.

But for one week, the spirit of the Egyptian people again gives hope that a new and better future for Egypt lies ahead.