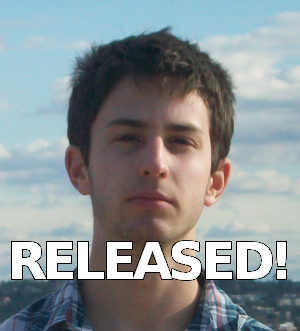 Natan Blanc, 19-year-old Israeli conscientious objector, was freed from detention on Tuesday and officially discharged from the Israeli army yesterday.

Our last blog on Natan Blanc’s case asked, “What Will it Take for the Israeli Military to Stop Imprisoning Natan Blanc?” We believed it would take Amnesty International members and other activists making their concerns known and taking action – and because you did – Natan Blanc is now FREE after being forced to serve 10 consecutive prison sentences for his refusal to serve in the Israeli military based on his conscientiously held beliefs.

Natan Blanc’s father received a call on May 30th from his son telling him that he had been informed that he would be released at the end of his current prison term. The decision follows a ruling by the Unsuitability (or Compatibility) Committee which – according to the Israel Defense Forces (IDF) – is designed to deal with people with behavioral problems who are deemed unsuitable for army service. It is not a committee which explores whether someone is a genuine conscientious objector or not.

In practice, the Committee seems to work as a mechanism for the IDF to rid itself of the problem of conscientious objectors who have been repeatedly imprisoned by declaring their ‘unsuitability’ based on poor mental health or discipline problems.

Young, conscripted Israelis who refuse to serve in the Israeli military are stigmatized by being labeled as mentally or physically lacking instead of being granted recognition as a conscientious objector.

While Amnesty welcomes the release of Natan Blanc, we remain concerned about the treatment of conscientious objectors in Israel and the current, inadequate system in place. No one should be imprisoned for their conscientiously held beliefs.

The right to object to military service on grounds of conscience is protected under international human rights law and although Israeli law does allow for pacifists to be exempted, the current process appears arbitrary and the review committee often rejects cases brought before it on those grounds.

Amnesty believes that the Israeli government should establish a fully independent and impartial body to assess claims of conscientious objection in a fair and transparent manner.

Our advocacy for the rights of conscientious objectors in Israel is far from over, but Natan Blanc’s permanent release is a big step in the right direction.