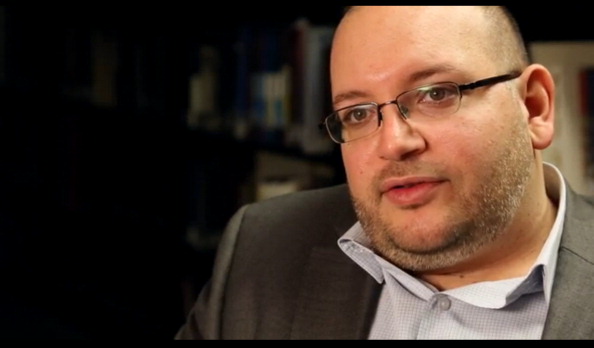 Yet those who held out hopes that this and other harbingers of more openness—including interviews and statements by President Rouhani and his allies—were likely confounded by more sobering recent news. The arrest of Washington Post correspondent and dual Iranian and American citizen Jason Rezaian, his wife Yeganeh Salehi—also a journalist—represents both a worrisome escalation in the Iranian hardliners’ campaign to assert their power and authority in a shifting and volatile environment but also a sobering trip down memory lane.

The fate of Jason Rezaian and his wife–who have been held in solitary confinement since July and are reportedly being charged with “security related offenses”– is being played out concurrently with the excitement generated over Jon Stewart’s new directorial debut feature film, about the ordeal suffered in Iran by another prominent journalist from a prestige US media outlet. Rosewater tells the true story of Maziar Bahari, an Iranian-Canadian journalist and film maker who was covering the disputed 2009 elections for Newsweek. He was arrested, tortured, forced to make a taped “confession” and ultimately released after a concerted campaign by journalists and human rights organizations.

Those who know Jason Rezaian have pointed out how he made every effort to maintain a low profile and was very cautious about getting involved in sensitive and political matters. Yet this prudence on his part did not matter in the end—and in fact he likely was not arrested for anything he “did” but rather for what he was—a journalist working for a prestigious American newspaper, and therefore a convenient target providing an excuse for Iranian hard-liners to trot out their tired old narrative about US media outlets—which of course are controlled by the CIA—and their campaign to undermine the Iranian government.

Fast backward more than five years and we find Maziar Bahari caught up in the same nightmarish web not of his making. Reading his account of his interrogation sessions in his memoir Then They Came For Me—on which the film Rosewater is based—is horrifying as well as darkly comical. Never ones to let facts stand in the way, his captors start with the certainty that Newsweek is controlled by the US government and that therefore Maziar Bahari was an agent of said government. So any and all facts must be shoehorned into this narrative; even some time spent in the state of New Jersey is twisted beyond all recognition by his interrogator who has decided that New Jersey—which most Americans associate with innocuous suburbia— is in fact a den of iniquity and the site of unspeakable acts of depravity.

Maziar Bahari and Jason Rezaian were both credentialed journalists who had official permission to carry out their professional activities and should therefore have had reason to feel safe; however the ongoing crackdown on Iranian journalists whose work is primarily intended for an internal Iranian audience provides insight into the precarious position of all journalists operating in Iran—even at a time when President Rouhani and his allies have publicly advocated for greater freedom, including freedom for internet users.

The recent harsh crackdown on freedom of expression, including arrests and imposition of harsh prison sentences, as has been reported by the Committee to Protect Journalists and other human rights organizations. For instance Saba Azarpeik, a journalist for the reformist publications Etemaad and Tejarat-e Farda, has been held in solitary confinement in incommunicado detention since her arrest on May 28, 2014. Although her family has not been told why she was arrested, apparently faces the vague but too-frequently used charges of “spreading propaganda against the state” and “spreading lies” in relation to a previous arrest in 2013. A media outlet tied to the government has claimed that she was arrested because of her alleged ties with foreign media and journalists.

Meanwhile the families of journalists who work for the BBC Persian Service have been harassed, other journalists in Iran have been accused of working for or collaborating with the BBC (a charge that BBC has denied) harsh sentences were handed down in July 2014 to four young Iranians for their activities on Facebook, and the government has shut down a number of publications, including Aseman in February and Ghanoon in May of 2014.

These instances of suppression of the right to freedom of expression and free exchange of information, as well as other disturbing trends such as the alarming rise in the number of executions in 2013 and so far in 2014, suggest that Iranian hard liners, who control the Judiciary, Prosecutors offices and the Intelligence and myriad security agencies have been tightening their death grip on Iranian society. These elements would fear diminishing influence, power and resources as a result of any lessening of tensions with the West, as a result of a possible nuclear deal and subsequent (hoped-for) easing of sanctions.

Targeting Western journalists could represent a significant upping of the ante—perhaps an indication of a more concerted effort to stymie the Iranian pragmatists allied with President Rouhani who have endeavored to present a more moderate image to the world. Such efforts would be considerably undermined by high profile arrests and proceedings against Western journalists and could signal a new and potentially more dangerous phase in the struggle between pragmatists and hard-liners for pre-eminence. In a zero sum game calculation where any concessions to moderates could be construed as unacceptable loss of ground.

Iranian hard-liners continue to resort to the same stale and dusty playbook whenever they want to crush their perceived enemies—but they certainly don’t appreciate anyone exposing their tactics; Rosewater had not even debuted on the film festival circuit before the movie and its director were denounced on Iranian state-affiliated television which claimed that Rosewater had been commissioned by Jon Stewart’s “masters” including the CIA and the Zionist Lobby.

However the fact that they felt the need to counter the exposure is an indication of a not-so recognized reality: the Iranian authorities have always been sensitive to international pressure and censure of their human rights violations. Iran will be in the international public spotlight as it faces its Universal Periodic Review (UPR) by the U.N. Human Rights Council in Geneva later this fall, when its human rights record will be closely scrutinized. The HRC strongly condemned Iran’s human rights record at its last UPR in early 2010 and issued a number of recommendations, few of which have been implemented by the Iranian authorities. It can be anticipated that as at previous sessions of UN human rights bodies examining Iran, the Iranian authorities will send a high-level and suave delegation for a “charm offensive” to present Iran in the best light.

So the next few months are a critical time for human rights advocates and the journalist community to press the Iranian government not only to provide information about the detention of Jason Rezaian and his wife, but also to end the persecution of Iranian journalists who have been bravely persevering in their efforts to fulfill their professional responsibility to inform the public.