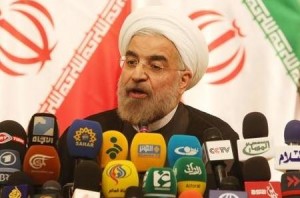 In the final days of the campaign, President-Elect Rouhani even proposed a “civil rights charter” for Iranians. But while new guarantees on the books would be welcome, what is really needed is a commitment to actually adhering to human rights standards and guarantees – many of which already do appear in Iran’s current Constitution. Interestingly, as a response to persistent criticism by the U.N. Special Rapporteur on the Situation of Human Rights in Iran and the U.N. Human Rights Council, Iranian representatives have quite disingenuously pointed to for instance, prohibitions on torture that are found in the Constitution – as if having such protections in writing somehow obviates ensuring that these are observed in practice!

Of course the authorities may make a calculation that easing some of the restrictions – and even releasing some political prisoners – may distract the public’s attention from the dire economic conditions that prevail now in Iran. But what is really needed is a sincere commitment to a pervasive reform of human rights standards and practices – something that has been repeatedly urged by U.N. bodies and representatives, as well as international human rights organizations such as Amnesty International.

An excellent start would be to announce that the U.N. Special Rapporteur on Iran will be allowed to pay a visit to carry out a research mission in Iran, something he has repeatedly requested and which the Iranian government has just as repeatedly refused. A great next step would be to allow Amnesty International access to carry out a research mission. And then they can release 2009 presidential candidates Mir Hossein Mousavi and Mehdi Karroubi, who have been held under house arrest with virtually no contact with the outside world since February 2011. And then….

Now I am allowing myself to get carried away – I’m dreaming of the doors of Evin Prison and Raja’i Shahr Prison opening and all the prisoners of conscience – like Nasrin Sotoudeh, Majid Tavakkoli and Reza Shahabi – pouring out through those doors, back to their families and their peaceful human rights advocacy. I’m dreaming of an end to torture – even the abolition of the death penalty!

Perhaps all these necessary steps will not happen right away, but maybe we can see some possibility for some meaningful change. Well, we can always hope!

Note: Amnesty International does not endorse any candidate, whether real or not, in any election.