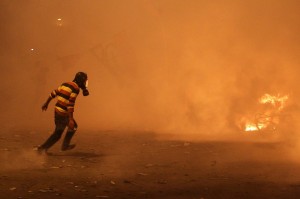 Egyptians may get the first steps towards accountability tomorrow, when a verdict is expected in the trial of Mubarak on charges of killing protesters during the “January 25 Revolution” last year. Some 840 protesters were killed and more than 6000 injured during the uprising that forced Mubarak to step down in February 2011.  But while significant, this trial does not delve into the human rights abuses under Mubarak’s rule for the three decades prior to the revolution.

“The security forces operated under a culture that told them they were constantly above the law. Now they need to abide by the existing legislation and they won’t enjoy any extralegal powers.”

In a Q&A with reporters yesterday, US State Department spokesperson Mark Toner described the US government’s position:

“Well, you know where we stand on the lifting of the emergency law. We’ve always encouraged the SCAF [Egypt’s military government] to do that.”

But US officials took advantage of Egypt’s repression in recent years.  Following the September 11th attacks, the US unlawfully and repeatedly sent detainees to Egypt.  This was done without any due process and in clear breach of the absolute prohibition on sending anyone to a country where they would be at risk of serious human rights abuses such as torture.

In May 2005, while visiting the US, Egyptian Prime Minister Ahmed Nazif stated that 60 or 70 people had been transferred to Egypt by US intelligence services since September 2001.  The resulting human rights violations were entirely predictable.

As documented in a 2007 Amnesty International report, former Secretary of State Colin Powell even praised the Egyptian government’s anti-terrorism practices under Mubarak.  Powell stated that “we have much to learn from them” and expressed his “appreciation for the commitment that Egypt has made to working with us as we move forward to deal with the scourge of terrorism.”

The end of the repressive Emergency Law was a key demand of protesters who helped push Mubarak from power.  Now the question remains as to whether a change in law will be matched by a change in behavior.  It is also unclear whether other problematic laws that are still on the books will also be removed.

Since Mubarak’s ouster over a year ago, security forces have tortured, shot, and killed protestors with impunity.  Thousands of Egyptian civilians have experienced military trials.  Not only must these violations be stopped, but their perpetrators must be investigated and brought to justice.  The Supreme Council of the Armed Forces – Egypt’s military government – has operated with reckless impunity as it has crushed protests in the post-Mubarak environment.  It is time for the decades of abuse to end.

3 thoughts on “Is Egypt’s “State of Emergency” Finally Over?”