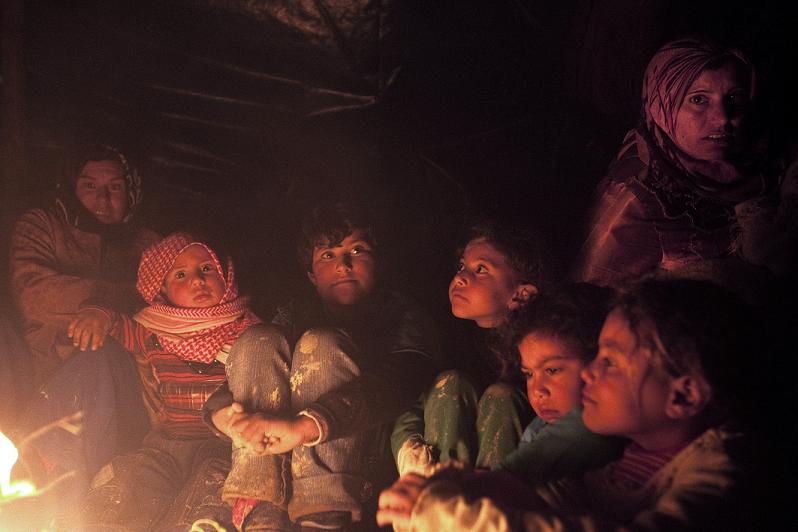 A Syrian family sits around a fire resting in the northewestern village of Janoudia, in Idlib province, as they wait to be helped by rebels of the Free Syrian Army to cross the Syrian border with neighbouring Turkey. (Giorgos Moutafis/AFP/Getty Images)

Donatella Rovera, Amnesty International’s senior crisis adviser, was in Syria’s Idlib province for 10 days at the end of April. Here she reports some of the first-hand accounts of the brutal crackdown by the Syrian regime against its people:

“Soldiers came to our home and took my son. Later, as I was peering out of the window I saw soldiers line up eight young men standing facing the wall with their hands tied at the back and shoot them. Then they put the bodies in the back of a pick-up truck and left. I don’t know if the men were all dead or injured. At that point I did not know that one of the men was my son. His body was found with other bodies at a school not too far from our home.”

A relative of another man, who was also killed that day told me:

To say that families of victims and eyewitnesses are scared is an understatement. Those I met were literally terrified.

“Members of the military security came to the house of our relatives, where we were staying and asked for our ID and did not find any problem; we were not wanted. Then one of the soldiers looked at my relative’s cell phone and found a pro-revolution song.

They took him outside … A neighbour told me the soldiers had shot him and then taken him to a nearby house; I went there and found him injured. He had been shot in the ear and neck but was still breathing. Some neighbours helped to carry him to the car and three of them took him to a field hospital (normal hospitals have long been out of bounds to people injured by the army/security forces) but on the way there they were stopped by soldiers and were killed.

Their bodies were later found at a school, except the body of my relative who had been taken back to the house where he had previously been left for dead. They had finished him off with an additional shot to the head.”

These are the accounts of relatives of victims and witnesses of extrajudicial executions carried out by the Syrian government’s security forces in the city of Idlib on April 16th. They only agreed to meet me and speak on condition that their names and any details that could identify them would not be published. Others, whom I was able to reach after much chasing, said they could not speak as the danger of retaliation against them and their families is too great.

To say that families of victims and eyewitnesses are scared is an understatement. Those I met were literally terrified. 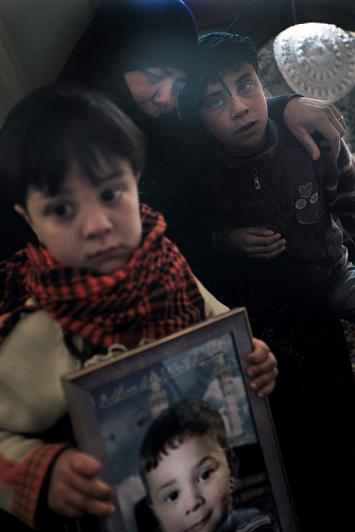 Syrian mother with her two sons, one of them holding a picture of his four-year-old brother Iyab who was killed in an attack by government forces. (Ricardo Garcia Vilanova/AFP/Getty Images)

A man whose wife and child were shot during the army’s heavy-handed incursion into Idlib city a month and a half ago (March 10 to 14) simply said:

“I don’t care about myself, but I have other children; if something happens to me who will look after them?”

An elderly woman whose son was taken from home by soldiers and then found dead later that day told me she has no news of another of her sons who was arrested by military security weeks ago.

“I’ve already lost one son; I don’t want them to kill the other too,” she said.

A woman whose house was burned, looted and ransacked on 11 March told me that the only possibility for reporting the attack to the authorities was for her to say it had been carried out by “armed groups”.

“The neighbours saw it was military security members who attacked my house. It was the middle of the day and there were tanks and soldiers and security forces members everywhere in the area; how on earth could this have been the doing of armed groups? So I did not lodge a complaint.”

I got to Idlib a few days before the arrival of the UN observers. Most people I spoke to were sceptical that their presence would make any difference. Others were very keen to speak to the observers but were desperately worried and frustrated that they would not have the opportunity to do so safely.

They feared that with the current level of military presence and surveillance there is just no way for ordinary people to approach the observers in confidence. Indeed, during the few days I spent in the city the place was swarming with uniformed and plain-clothes army and security personnel; pick-up trucks with anti-aircraft machine guns were stationed all over the market area and elsewhere in the centre of town, and there were checkpoints all over the city.

On Friday morning, I saw a very large contingent of uniformed soldiers and pro-government armed gangs known as shabiha being transported in open-back lorries and a couple of hundred of them being unloaded in the Dabbit district, in the centre of town. People still did not know the UN observers were coming to town but commented that any post-Friday prayer demonstration was clearly out of the question. As I was leaving a house in Dabbit a UN convoy was passing by; they were certainly not going to be held up by any traffic jam; the streets were completely empty.

In several villages and towns around Idlib the scars of the recent army incursions are very visible. Hundreds of houses have been burned down and everywhere I met families whose relatives were killed. Many were killed in exchanges of fire, in what seemed rather futile attempts by hopelessly outgunned armed opposition fighters to prevent scores of army tanks from entering the towns and villages. Others, both opposition fighters and people not involved in any fighting, were extra-judicially executed after they were arrested at their homes and those of their relatives.

In Saraqeb, a woman told me that in the afternoon of 26 March soldiers came to her home and took her 15-year-old son and then her 21-year-old brother from the neighbour’s house next door.

“I begged them not to take my boy, I told them that he is just a child, he still watched cartoons on TV; I tried to shield him with my body but they threatened me and took him away. And they also took my brother from the next door house. In the evening their bodies were found in the street, with others who had also been killed.”

In Taftanaz I met the families of two 80-year-old men who were killed in their homes during the army incursion into the town on 4 April. One was burned in his home. His wife told me:

“I had been staying with relatives across the street and my husband was at home. When I went back home I found it burned down but did not find my husband. I went out and asked the soldiers outside where they had taken him. I thought they had arrested him. A soldier replied ‘Go back in and look for him’. I went back and found his remains in a pile of ash.”

In Sarmin I met the mother of three young men who were taken from their home in the early morning of March 23 and burned outside the building:

“The army came early in the morning, we were all asleep. They took all my three sons who were at home and did not let me follow them outside; every time I tried to go out they pushed me back.

When I was able to go outside, after a couple of hours, I found my boys burning in the street. They had been piled on top of each other and had motorbikes piled on top of them and set on fire. I could not approach their bodies until evening because there was so much shooting.”

In addition to the human loss, families are having to cope with the loss of their homes and livelihood. Those whose homes and businesses have been burned down or destroyed and who have been left with nothing other than the clothes on their back are relying on the charity of relatives and friends. Some are trying to repair or salvage what they can from their wrecked properties but many are beyond repair. There is no doubt that the burning down of so many homes and businesses – and including medical facilities such as field hospitals and pharmacies – was deliberate, seemingly a combination of revenge and collective punishment.

The extra-judicial executions, the shooting and shelling of residential areas, and the deliberate destruction of homes, businesses and other properties in the Idlib area, are consistent with the pattern of violations inflicted by Syrian forces on the population in other parts of Syria where there have been opposition protests and/or armed opposition.

Soldiers, members of the security forces, and the civilian leadership up and down the chain of command should know that such abuses constitute crimes against humanity and the claim that “I was just carrying out orders” will not keep them from being brought to justice – either in Syria or in other countries around the world.

Take action to help the people of Syria

Article originally appeared in the Guardian

6 thoughts on “Inside Syria’s crackdown: ‘I Found My Boys Burning in the Street’”