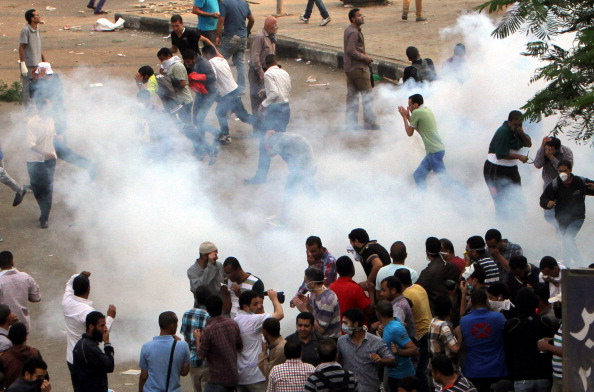 In defiance of government threats and a deeply unsympathetic public, pro-Morsi protesters organized marches throughout Cairo. Their aim was to reach Tahrir Square, the iconic epicenter of the “January 25 Revolution” and current site of pro-government gatherings.

They were stopped in their tracks by tear gas, shotguns, and live ammunition. The security forces’ use of excessive lethal force to disperse pro-Morsi protesters and prevent them from approaching Tahrir Square was accompanied by violence against the demonstrators by men in civilian dress.

The fiercest clashes, on Tahrir Street in Dokki, left some 30 dead, and near Ramsis Square another 16 were killed, according to official figures. 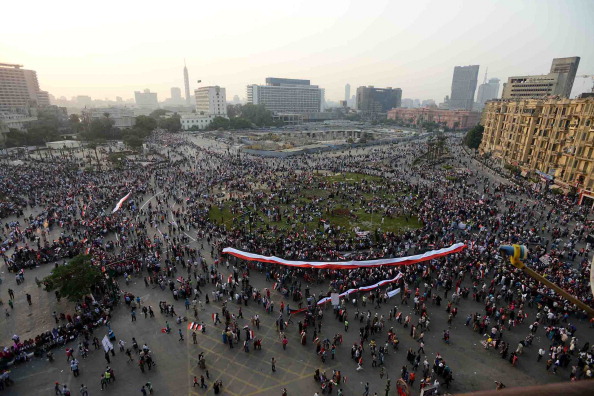 Not everyone in Cairo was caught up in the Oct. 6 violence. Hordes of celebratory crowds had gathered in the city that day, as well as football fans who were watching Egypt’s favorite team play in the Confederation of African Football (CAF) Champions League.

But just a short drive away from the revelry, wailing and insults filled the reception area of the Ibn Sina Hospital. Inside, relatives identified the lifeless bodies of five men lying in pools of blood on the floor. According to staff, the hospital received nine fatal casualties and some 40 injured protesters as a result of the nearby violence on Tahrir Street.

A 20-year-old man who sustained shotgun pellet injuries to his right eye told me that when pro-Morsi protesters reached Tahrir Street in Dokki, they came under attack. Men in civilian clothes, armed with swords, knives and other weapons, came streaming in from side streets. He claimed that the protesters managed to ward them off, mainly by hurling rocks at them, and tried to press on towards Tahrir Square until security forces fired tear gas and live ammunition in their direction.

Another 20-year-old may lose his sight after sustaining shotgun pellet wounds to both eyes during the same protest. He claimed that security forces captured pro-Morsi protesters and watched as men in civilian dress, whom he described as “thugs” beat them. He admitted to similar behavior by pro-Morsi protesters beating a captured “thug,” who allegedly then “confessed” to being paid by security forces to attack the pro-Morsi march.

”
Elsewhere in Cairo, local residents opposing the Muslim Brotherhood – the political movement supporting the now deposed Morsi government – were also injured during the violence. Youssef Mohamed Abdelfattah, 15, sustained a shotgun pellet wound to his eye when passing pro-Morsi protesters who had clashed with local al-Manial residents. An eight-year-old boy from al-Manial also required hospitalization after being hit in the face by a rock hurled between the two factions.

Security forces also used unwarranted lethal force to disperse pro-Morsi protesters who were attempting to make their way from Ramsis to Tahrir Square.

A 16-year-old schoolboy receiving treatment for two gunshot wounds to the hand and leg told me that he was shot while bending down to help another shot protester. He described how the violence unfolded:

“We prayed Asr (afternoon prayer) in the street under the Galaa Bridge. Two minutes after we finished, there was heavy tear gas [fire] and people started running in all directions. I was in the front of the march, and could see two armored vehicles coming towards us from the direction of Tahrir Square and shooting, there were no warnings. Shots were coming from all directions.

“I was shot within minutes, and was rushed towards a side street by other protesters. I had gone to Tahrir Square a few hours before to see what it was like, and there was so much security at the entrances, and people celebrating. People who are with Sisi are protected, and those outside are killed. I am the same person, and was safe in Tahrir Square and shot at in the march to Tahrir.”

Most injured pro-Morsi protesters I interviewed have no intention of lodging complaints with the public prosecution. They fear that investigations will lead to their arrest rather than justice.

The Egyptian authorities have promised impartial, independent and thorough investigations into repeated abuses by the security forces – but such investigations have yet to materialize. Since the “January 25 Revolution,” members of the security forces reasonably suspected of killing protesters have either never been brought to trial, have been acquitted or have received suspended or light sentences.

Unless this cycle of impunity is broken, with those responsible for killing and torturing protesters removed from their positions, and real steps are taken to reform and overhaul the security apparatus, there is a real risk that violence like that seen on Oct. 6 will be repeated.

This time, the majority of the victims were supporters of deposed President Mohamed Morsi. Next time, it could be anyone standing up against whoever is in power.

One thought on “Have You Seen the Violence That Continues in Egypt?”